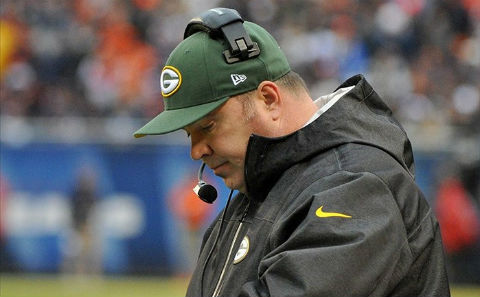 The concept of yin-yang in Chinese philosophy is used to describe how seemingly opposite or contrary forces are interconnected and interdependent, and how they give rise to each other as they both ebb and flow. Yang is the white side with the black dot on it and yin is the black side with the white dot on it. The relationship is often described as the dark (yin) and the light (yang), as not opposing forces, but complementary ones working together to form a dynamic system greater than either separate part.

There’s yin and yang on the gridiron as well: the light and the dark, the cerebral and the physical, the mentality of a surgeon and that of a warrior, the offense and the defense.

And there needs to be a balance there. A violent warrior without the ability to think cerebrally is just as useless on the field as the erudite football scholar who’s afraid of physical contact. The warrior and football scholar must both remain present while the other takes the forefront.

Mike McCarthy is a steady man and a steady coach. He backs his players loyally (some say to a fault), carries himself without fanfare, and feels that emotion will only hinder performance.

McCarthy’s approach is the right one because the offense, and more to the point the Packers offense, is the epitome of the yang or “light” side of the game. It’s about speed, precision routes, timing, accuracy and execution. Physicality is a part of it, but it’s rarely mentioned as a key ingredient.

The offense coming out onto the field should have a steely approach, free of emotion and a laser focus about the task at hand… and they generally do. They keep a flat line, never get too high or low, and focus on the cerebral aspects of their job. The yang takes center stage and while the more physical and angry yin is ever-present, it takes a backseat when the offense is on the field.

Dom Capers has proven himself a worthy defensive coach for many years now. He was the person responsible for managing the Packers defense to a Super Bowl in 2010 and is well-respected as a bright defensive mind and one of the best with the 3-4 defense. He is polite, soft-spoken and comes off maybe even a little shy in interviews. While some defensive coordinators prefer to be right on the field so they can interact with their players during the game and keep them motivated, Capers prefers to sit up in the press box where he can better execute the cerebral aspects of the game.

The problem is when the defense takes the field it’s supposed to be all about emotion, brut force, physical toughness and domination. It’s about being a group with the ability to intimidate because the “dark” side has taken center stage and it’s now time to lay a physical beating down on someone.

That attitude has never shown up in Capers’ tenure and although Ted Thompson has built the roster in a way Capers couldn’t control, this defense has faltered in the mental side of the game possibly even more often than the physical.

Both the offensive and defensive units are a reflection of the leadership in front of them. There is no semblance of warrior mentality on either side of the ball and that’s because both McCarthy and Capers take an approach far greater yang than yin.

The end result is a team that isn’t known for their physical toughness, is more Porsche than bulldozer, and is able to be dominated by a tougher, more physical opponent. This, in essence, describes the teams that have eliminated the Packers the past two seasons and will continue to give them fits in the future.

Capers is a good man and a good coach who helped bring the Packers a championship, but he is not the fiery antithesis to Mike McCarthy this team has always been lacking and so desperately needs.