Packers Dispatch the Vikings Like We Knew They Would 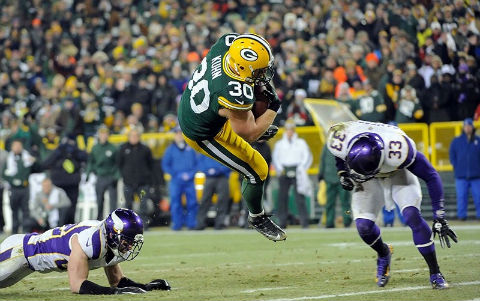 The Green Bay Packers handled the Minnesota Vikings on Saturday night. We all knew this would happen and it did — by the score of 24-10.

It wasn’t even as close as the score would suggest.

But let’s get this out of the way. The Vikings played without their starting quarterback, Christian Ponder, who sat out with an injured elbow. Would that have made a difference?

Should Ponder have played?

But Ponder didn’t play. Joe Webb started at quarterback for the Vikings instead. This is a guy who hasn’t started a game since 2009.

If you’re keeping score, that was Brett Favre‘s last season. And so…

The Packers beat the shit out of the Minnesota Vikings just like everyone outside of Minnesota expected them to. It didn’t start as anticipated — the Vikings marched down the field after receiving the opening kickoff and went up 3-0.

From there, it went pretty much to form.

The Packers scored 17 unanswered going into halftime, relying on some tough DuJuan Harris running and some pinpoint Aaron Rodgers‘ passing.

Rodgers was 23-of-33 for 274 and a touchdown on Saturday night. The Packers didn’t need anything else from their main man.

Green Bay added another touchdown in the third quarter to go up 24-3 and coasted from there.

So let’s get down to brass tacks.

Rodgers made the plays he needed to.

Peterson, who, granted, is a stud, only ran for 99 on 22 carries after gouging the Packers for 409 rushing yards in the previous two games this season. That means the Packers defense did their job. They certainly weren’t going to be beat by Webb and that scenario never became an issue.

If you look at the game stats alone, you’d probably expect that this game was close.

The Vikings were better on third down and had a higher yards per play average than the Packers. They also had three turnovers.

Those were fumbles by Marcus Sherels and Webb and a late pick by Webb. Clay Matthews ripped the Webb fumble and essentially ended any shot the Vikings had when he did so.

So let’s get on to some real playoff football, huh?

Packers at 49ers — that’s the real deal. As sweet as it is to crush those asshats from Minnesota, it’s time to wash our hands of that and start focusing on Colin Kaepernick, Frank Gore and company.