Packers, 49ers Playoff Rivalry Wasn’t Much of Rivalry After All 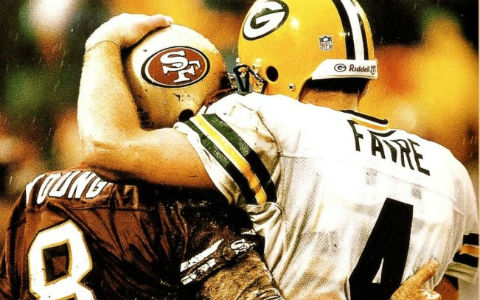 Quite a few people have been bringing up the Green Bay Packers rivalry with the San Francisco 49ers during the 1990s, this week. Specifically, their playoff rivalry.

In my memory, the 49ers of Steve Young owned the Packers of Brett Favre in those days (for the most part). Well, my memory is a failure and it seems like a lot of others are too.

The 49ers may have owned the Packers in the regular season, at least until they broke through in that landmark Monday Night game, but the Packers held a decided advantage in the playoffs.

Maybe the question is, can you call a completely one-sided affair a rivalry?

After the 1995 season, the Packers faced the 49ers in Candlestick in the divisional round. The 49ers were the No. 2 seed and defending Super Bowl champs. The Packers weren’t supposed to have a chance in this game, but they jumped out to a 21-0 lead and eventually won 27-17.

The signature play of this game was Wayne Simmons‘ early forced fumble, which Craig Newsome picked up and ran in for a touchdown. Of course, the next week, the Packers would go to Dallas and get rolled by the Cowboys.

After the 1996 season, the 49ers again faced the Packers in the divisional round, this time at Lambeau Field.

With Elvis Grbac starting at quarterback for the 49ers, that game was a 35-14 Green Bay blowout. The big play came via returner Desmond Howard, who took back a punt 71 yards for the opening score. The Packers went on to win the Super Bowl.

It was a similar story in 1997, when the two teams faced off in the NFC Championship game. This time it was in Candlestick, the 49ers had the No. 1 seed and Steve Young was running the show. Didn’t matter.

The Packers rode Dorsey Levens, who had 114 yards and a touchdown, to a lopsided 23-10 victory. The 49ers had only put three points on the board before a meaningless 95-yard, fourth-quarter kickoff return put them in double digits.

The Packers lost to the Broncos in the Super Bowl that year.

A year later, the Packers met the 49ers in the Wild Card round and San Francisco tallied their only playoff win of the “rivalry.”

In probably one of the most exciting games in 49ers history, Steve Young fired a last-second touchdown strike to Terrell Owens to pull out a 30-27 victory. The score came after a Jerry Rice fumble earlier in the drive. On that play, the officials ruled Rice was down, but replay showed he clearly was not. Unfortunately, replay wasn’t part of the game during the 1998 season. It returned in 1999 and some people would say that happened largely because of this botched call.

In the last playoff matchup between the two teams, the Packers would drop San Francisco 25-15 in a Wild Card game following the 2001 season. By that time, the cast had changed considerably for both teams.

Jeff Garcia was now the 49ers quarterback. Dorsey Levens had been replaced by Ahman Green for the Packers. And the list goes on.

Green provided the fatal strike in this game, going eight yards to score in the fourth and putting the Packers up 10. They would lose to the Rams the following week in the divisional round.

If today’s teams develop a playoff rivalry like those in the ’90s, let’s hope it’s just as one-sided for the good guys.

Here’s the Sausage, Courtesy of the Minnesota Vikings

Here's the Sausage, Courtesy of the Minnesota Vikings