Oh My God! Colin Kaepernick is a Brewers Fan! 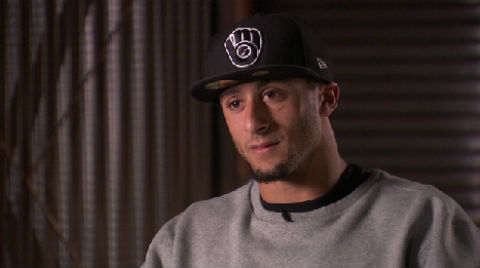 San Francisco 49ers quarterback Colin Kaepernick is now the source of outrage among Niners fans everywhere. Why? He wore a Milwaukee Brewers cap during an interview with NFL Network this week.

With the Green Bay Packers coming to town, that raised a few eyebrows.

So why would Kaepernick don such a heretical piece of headgear? Well, he was born in Wisconsin, lived there until he was four and grew up a Green Bay Packers fan. Apparently, he’s a Brewers fan too.

It’s kind of like how Aaron Rodgers grew up in Northern California as a 49ers fan. Of course, he wasn’t wearing a Giants baseball cap this week, so it’s not exactly the same.

Kaepernick’s biggest sin may be that he’s becoming the anti-Alex Smith — the guy who’s job he took. Smith has been known for sporting a Giants cap and he isn’t covered with tattoos. You know, the safe option you can bring home to meet your old man.

Kaepernick goes against the grain, much like he does on the football field. While Smith is throwing the safe six-yard passes all game, Kaepernick is scrambling around and taking shots down field.

San Francisco appears to prefer the latter approach to the game, so they’ll have to deal with stuff like Kaepernick representing Wisconsin at what may be an inappropriate time, I guess.

Packers vs. 49ers: What to Watch For, Playoff Edition