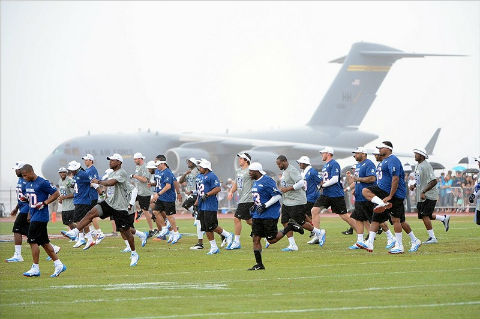 Want a laugh? Take a look at the Pro Bowl rosters.

One of the reasons the game is a joke is because half the guys who get selected to play in it (supposedly each conference’s best at their position) end up dropping out. For starters, guys on the Super Bowl teams don’t play and then guys who are injured start to drop out.

And you get this… a game pitting the second, third and fourth-best players at their positions against each other, minus any players from the two best teams. Woooooooo!

Guys crossed out won’t be playing for one reason or another. Their replacements are at the end of their respective lines.

Now that you’ve perused that joke of a roster, we’ll let you in on an even bigger joke.

Here are the teams who currently have the most Pro Bowlers.

As you can see, six teams that missed the NFC playoffs currently have more Pro Bowlers than the Green Bay Packers. In the AFC, Kansas City somehow has the second-most Pro Bowlers — more than Denver, the team that won their division.

Oh, and if you were unaware, the Chiefs will be picking first in the NFL Draft because of their two-win season. Clearly, loaded with talent.

You know this will be an exciting game. Just ask Josh Sitton, one of the Packers two Pro Bowl reps.

Ah, so the guys there are going out and getting pissed up every night. Super!

The Pro Bowl is this weekend. Be sure to tune in if you’re looking for some quality fourth-rate football!