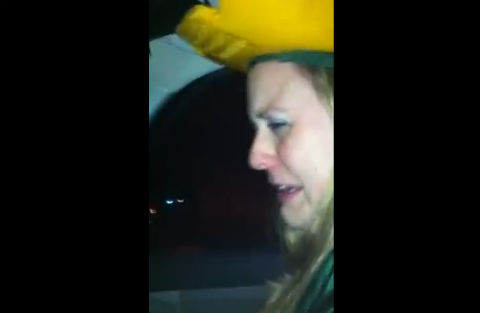 Everyone is bitching about he Green Bay Packers and their inability to do anything other than suck donkey dick in the playoffs, and rightfully so. That’s not news. Those guys are soft and they’re coached by buffoons.

What you probably didn’t know is people are bitching about Packers fans. No, not the mouth breathers from Minnesota. This is coming from within — from Wisconsin sportswriters.

And the crowds at Lambeau Field have started to remind me of those staid assemblages at the University of Michigan. It’s the place to be seen and all that, but it has been a long time since a visiting coach or player went on and on about how it difficult it was to hear and play in Green Bay.

Nowhere is it written that the Packers shall contend for if not win the Super Bowl every year, but some fans sure seem to think it is.

McGinn may be right — maybe Lambeau’s legions aren’t doing their job in collectively creating a hostile environment, giving the Pack the home field edge. Perhaps we’ve become entitled, thinking our team is ALWAYS a Super Bowl contender and that today’s game — win or lose — is merely a social occasion that will culminate in a trip to a larger, more festive clash, one titled in Roman numerals with a trophy that bears the name of a former Packers coach. Win? Lose? Who cares? The brats at that tailgate were AWESOME! And how many shots of RumChata did I down?

First of all, what the fuck is RumChata?

Second, go fuck yourself. I’d be willing to bet if the Packers trotted out a team that actually showed up every week and did their job, the fans wouldn’t be as disinterested as the players sometimes seem on the field.

I also bet people wouldn’t be peddling their season tickets to the highest bidder because they’d actually want to be there themselves, too.

And with that, I’ll leave it to you…