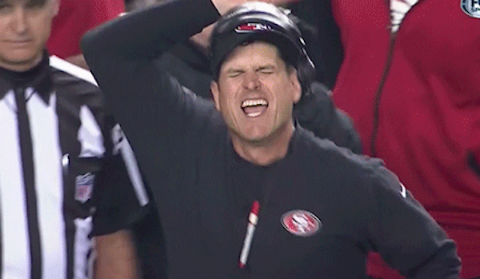 San Francisco 49ers coach Jim Harbaugh threw a bit of a fit during his team’s win over the Atlanta Falcons on Sunday.

Because that’s what Jim Harbaugh does. Because when he’s not being a total dick, Jim Harbaugh is a whiny child. And just think, you now get the added bonus of two more weeks of Jim Harbaugh!

So what’s up Harbaugh’s ass here? Well, the refs gave Falcons receiver Harry Douglas a catch on a pass he didn’t actually catch. Or so we’re told…

We were at the track on Sunday betting on the ponies instead of watching pointless football games not involving the Green Bay Packers.

We’re pretty sure this clip tells you all you need to know about Harbaugh though. And his team did win, so the botched call was moot.

Josh Sitton Gets to Go to Pro Bowl

These Guys May Have Played Their Last Game with Packers

These Guys May Have Played Their Last Game with Packers