Guess What Michael Crabtree Did After 49ers Beat Packers 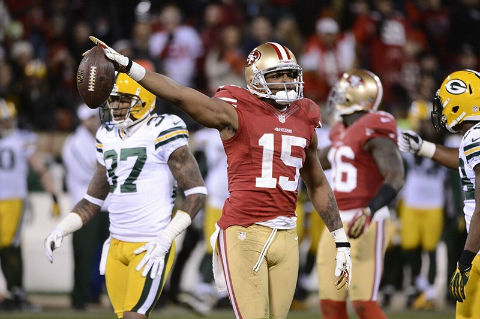 After last Saturday’s San Francisco 49ers win over the imposters who call themselves the Green Bay Packers, receiver Michael Crabtree went and celebrated his two touchdowns and 119 yards by… wait for it….

The alleged attack occurred at an unnamed hotel early Sunday, hours after the team’s victory over the Green Bay Packers.

Now let’s be fair and not jump to the conclusion we obviously feel the need to jump to. Crabtree hasn’t been arrested or detained by police. Right now, there’s only an allegation.

In fact, Crabtree is expected to play against the Atlanta Falcons in the NFC Championship game on Sunday. Does anyone else see the irony seeping into this situation?

If not, I’ll point to one Eugene Robinson, the former Falcons (and Packers) safety who went out and got caught with a hooker the night before Super Bowl XXXIII. He ended up playing in the game, but was a total liability and the Falcons got killed by the Broncos. Also humorous — Robinson was the NFL’s Man of the Year that season.

Anyway, could this be fate evening the score for Atlanta?

The 49ers have a pretty big distraction on their hands. They’re a fairly substantial favorite against a joke of a Falcons team, but maybe this will even things out and Atlanta will go on to get killed in the Super Bowl again.

Certainly something to keep an eye on.

So, who wants to bet Randy Moss was somehow involved in this alleged incident? Or how about a parlay of Crabtree, Moss and a Dirty Sanchez?

Someone is definitely winning big with that combo!