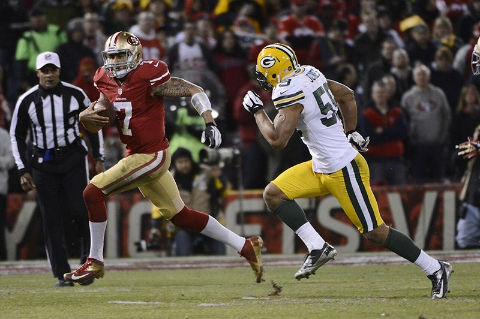 The long hangover has begun.

The Packers were outmuscled
Although they were outplayed in every aspect of the game, much of the blame for Saturday’s loss belongs on the defense. The 49ers simply pushed the Packers around. They outmuscled them and they were far more physical. It isn’t the first time this has happened either. The Packers defense was dominated by teams with great offensive lines this season. Minnesota would fall into the same category as San Francisco. The Packers defense is A.J. Hawk — looks alright on paper, but gets totally brushed aside when anyone with any power lays a hand on him. The Packers defense is finesse. They can’t compete with physical teams.

Everyone was wrong about the offensive line
How about the Packers offensive line? Facing one of the toughest defenses in the NFL and two top-notch pass rushers, they only gave up one sack. A lot of people suggested if the line could keep Aaron Rodgers vertical, the Packers would win going away. Most of those people doubted it would happen. Well, unfortunately they were wrong on both counts. The Packers didn’t lose the game because of their offensive line, though.

Sam Shields > Tramon Williams
Remember when Tramon went to the Pro Bowl a couple seasons ago? Remember when he looked like he was a shutdown corner? That seems like forever ago, doesn’t it? There were times this season and on Saturday when Williams looked like he didn’t even deserve to be the dime back. Meanwhile, Shields continued to play well. In our minds, he became the Packers No. 1 corner this season. If Williams continues to play his brand of inconsistent, disinterested football, we’d be surprised if Casey Hayward doesn’t take his spot in the starting lineup.

What happened to the chip on Aaron Rodgers’ shoulder?
Aaron Rodgers used to like to stick it to people when he felt disrespected. He used to like to prove people wrong. That Aaron Rodgers actually showed up against Houston this season. Everyone was down on the Packers about their slow start. The Texans were undefeated. Rodgers came out and fired six touchdowns and the Packers won handily. That’s the last time we saw the vengeant Aaron Rodgers this season. You might have figured that guy would show up against the team that passed him over with the No. 1 pick all those years ago. At the time, he said he would one day make the 49ers pay. Saturday was not that day. Rodgers was 26-of-36 for 256 yards, two touchdowns and one interception. Not really setting the world on fire in front of the hometown crowd.

And once again…
Mike McCarthy gets outcoached. This is nothing new in the playoffs. It happened in the 2007 NFC Championship game. It happened against the Giants last year. It happened on Sunday. The Packers had no answer for anything the 49ers did. They didn’t make appropriate adjustments. The Packers just looked unprepared for what was going on around them. That comes down to coaching.

Chiefs Hire Dorsey, Ball Could Be Next to Leave