Eight Years Ago Today, Randy Moss Did This 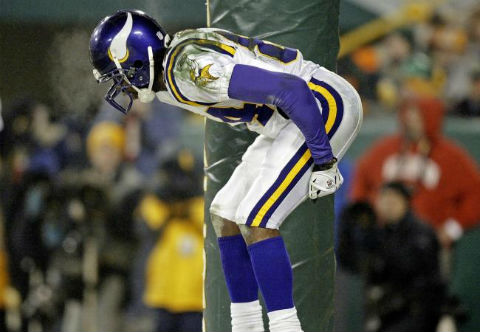 Is there anyone who exemplifies what the Minnesota Vikings are all about more than Randy Moss? On January 9, 2005, Moss and the Vikings were playing the Green Bay Packers in a Wild Card game at Lambeau Field.

The result was an easy 37-yard Vikings touchdown in the fourth quarter of a game that was pretty much over. Not content with that, Moss then pretended to moon the crowd because, well, Randy Moss — like all Vikings — is stupid fucking cunt.

Joe Buck, who was calling the game, called it “a disgusting act by Randy Moss.”

Moss, of course, now plays for the San Francisco 49ers and unlike those heady days, is pretty much a washed-up chump. He put up a whopping 28 catches for 434 yards this season.

It would be nice to send him into retirement with a beat down.