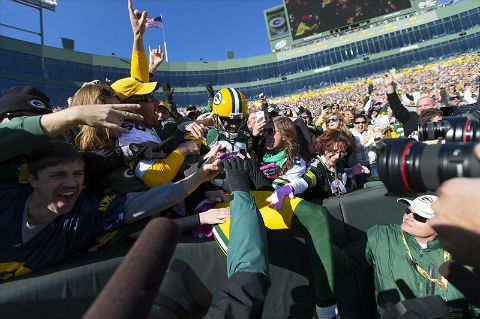 In case you haven’t noticed, the Green Bay Packers haven’t been using their all-time receiving leader very much lately. Or at all for that matter. Donald Driver has been inactive in four of the Packers last six games, including their playoff opener.

Probably not exactly what Driver envisioned when he came back for his 14th NFL season.

Once the Packers No. 1 receiver, Driver was clearly behind Greg Jennings, Jordy Nelson, James Jones and Randall Cobb on the depth chart this season. You could argue he was also behind undrafted rookie Jarrett Boykin late in the year.

Boykin had all five of his catches this season in week 8 or later. Driver only had four catches after week 7.

On the season, Driver had just eight catches for 77 yards.

So what happened here?

Well, we’re guessing Driver overestimated his value to the Packers. The evidence says the team wanted to move in a different direction, but Driver was coming off his Dancing With the Stars win and insisted (then) he wanted to play two more seasons. His popularity with fans had never been greater coming into the season and Driver has always had an “I’ll prove everyone wrong” attitude.

That served him well when he was young and fighting to make the team. It didn’t serve him as well now that he’s 37 — at least on a team as loaded at receiver as the Packers are.

Meanwhile, it would have been hard for the Packers to release a player as popular as Driver. That situation could have been Brett Favre all over again and we know the organization doesn’t want to go through that again. It’s a PR nightmare waiting to happen.

So the Packers probably kept a player they didn’t really want this season. A reward for years of exceptional service, you might call it.

But the writing is on the wall. Driver clearly isn’t in the Packers plans right now and he almost certainly isn’t in them next season.

Retirement after the season and a gracious exit seems to be the obvious route for Driver. Hopefully the Packers can give him another ring as a parting gift.