Christian Ponder is Sorry His Vagina Hurt on Saturday, Everyone 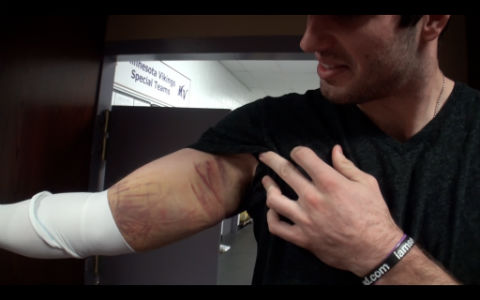 That being said, Ponder kind of pulled a Cutler when he decided to stand around on the sidelines for his team’s playoff matchup with the Green Bay Packers because his vagina hurt. That, despite finishing the very game in week 17 in which he injured said vagina.

Whoops! It was his arm, wasn’t it?

Yes. Ponder’s arm currently looks like this. Doesn’t exactly scream “I can’t throw a football,” but hey, I’m not a doctor.

You know Bart Starr would have laughed at such a minor inconvenience, jogged out onto the field and fired a pair of touchdowns to a drunken Max McGee. Christian Ponder is no Bart Starr though and it doesn’t take a doctor to know that.

Anyway, Ponder wants everyone to know that he’s sorry his sore vagina kept him out of the game.

“To know that we had a game like that in Green Bay, we had a very good chance of winning that game,” Ponder said. “For myself to let my team down, that’s what hurts the most.”

In Ponder’s absence, Joe Webb was a sterling 11-of-30 for 180 yards, one touchdown and one pick on Saturday.