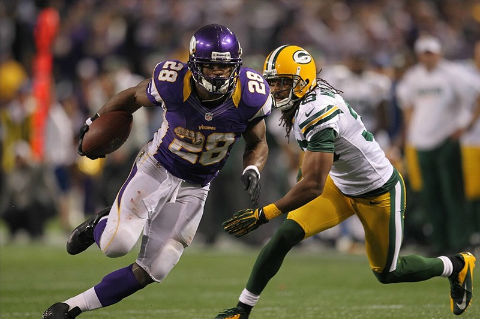 If the Minnesota Vikings have any chance of beating the Green Bay Packers this weekend, it’s going to take a heavy dose of Adrian Peterson.

You know, because he’s their whole team. It sounds like Peterson is entirely aware of that fact.

On Wednesday, the running back said he’ll ask his coaches if he can return kickoffs and get on the Vikings field goal block unit on Saturday.

“For the past two years I’ve been trying to get in on field goal block. Come in off the edge, you know?” Peterson said via The Associated Press. It’s just going to take one block for them to really be like, ‘OK, you know what? Let’s take the chance and let you go out there and get it done. Kickoff return, I wouldn’t mind getting back there. I’m in it to win.”

What are the chances this actually happens?

Slim to none. The Vikings would be stupid to risk their best — their only — player in a secondary aspect of the game right?

Well, right, but these are the Vikings we’re talking about. It sounds as if they haven’t entirely ruled out putting Peterson in to return a kickoff with the game on the line.

“We would show him exactly where the return is supposed to hit and let him do his magic. There’s absolutely an opportunity for him to go back there, I would think, in a crucial situation,” special teams coordinator Mike Priefer said.

Saturday is probably the perfect time for this to happen. The Packers can’t tackle Peterson on offense. There’s no reason to expect they’d be able to tackle him on a return.

Jerel Worthy’s Season is Over