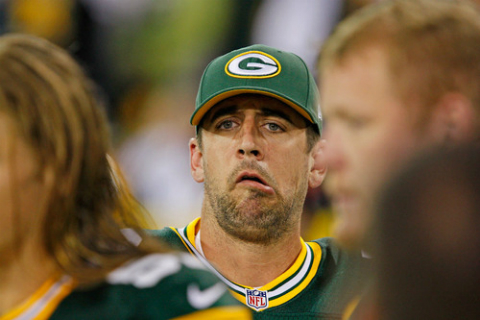 You could point to a lot of things for the Green Bay Packers failure of a 2012 season, but quarterback Aaron Rodgers pointed to one thing we’ve noted several times before — the Packers seemed disinterested at times.

Rodgers says the 2012 Packers lacked hunger and weren’t united. Neither of these things surprises us.

Two games in particular demonstrate it.

In October, the Packers played a clearly overmatched Jacksonville team in Lambeau Field. This is a team that went on to finish the season with two wins. Instead of hammering the Jaguars from start to finish, the Packers turned in one of the most uninspiring, ho-hum performances I can remember — ever. They won 24-15. Instead of putting up 24, they should have won by 24. They let a terrible team without its best player (Maurice Jones-Drew was injured) hang around for most of the day, while letting one of the league’s worst starting quarterbacks (Blaine Gabbert) throw for a season-high 303 yards.

Then there was the November game with the Giants. The Packers came out flat from the beginning and got pounded more thoroughly than they have by anyone all season — to the tune of 38-10. The game was over by halftime. I’ve never seen a Green Bay team play with less pride and less fire than the assholes who showed up on that day in New Jersey. An embarrassment.

So here’s what Rodgers had to say.

“We need to just figure some things out within the locker room, I think, and maybe just think hard about what was so special about that 2010 team that won the Super Bowl, and try to channel some of those emotions and ideas and thoughts and feelings and incorporate some of that stuff at the beginning of this year when we reconvene in April and kind of set the vision then.

“It was a disjointed year [in 2011], the first year out of the lockout situation, the year we had. I know [coach Mike McCarthy] has said some of the OTAs didn’t go the way the wanted them to this year. So we need to do a better job as leaders of setting the vision early and holding guys accountable for falling in line.”

Asked what made 2010 so special, Rodgers said:

“I think there were two things in particular most people would agree with. One, there was a very strong appreciation for the opportunity. For whatever reason the appreciation wasn’t the same this year. The guys [in 2010] were just really thankful to have a job in some cases, some of the guys we brought in, but also thankful to get into the playoffs and be somewhere where they felt special and they felt important. It was very united group, more than we’ve had in any of the eight years here I’ve been a part of.

“And the second is we were hungry. We hadn’t done it before. There were a lot of doubters out there. It’s hard, I think, when you have success to be able to have that same amount of hunger that you had when you haven’t had that kind of success before. We need to figure out how to do get back to that place.”

The Packers aren’t being motivated properly. Hell, the lengths the coaching staff goes to to defend these guys is crazy. If you were to listen to Mike McCarthy, no one ever does anything wrong — just need to get better at this or make some adjustments with that and everything will be fine. No wonder there’s no fire under anyone’s ass to play harder — very rarely does anyone lose their job.

In Green Bay, that only happens by accident. Underperforming center Jeff Saturday only got replaced because the Packers saw Evan Dietrich-Smith performing well at another position. They only saw that because other guys got injured. Meanwhile, the Packers stuck with struggling kicker Mason Crosby all season. They didn’t even look at another kicker, much less bring in any competition.

And A.J. Hawk… don’t even get me started…

Take a look at New England. They make a run just about every year and they have a similar talent level as the Packers. What’s different?

For one, they churn that roster all season. If someone isn’t performing, they’re not afraid to replace him. They take on rejects and nobodies who fit their system and they win.

Guys who’ve been tossed on the scrap heap before usually motivate themselves. Bill Belichick isn’t a rah-rah guy, but he keeps his players focused and accountable.

The Patriots end up in the Super Bowl more often not.

It’s pretty clear, the problem lies at the top for the Packers.

Bears New Head Coach is… a Guy From the CFL!