Packers Hitting on All Cylinders in Win Over Titans 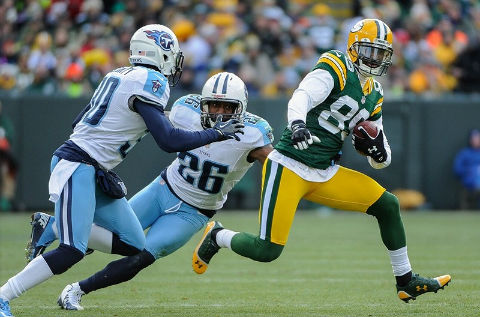 The Green Bay Packers dominated the Tennessee Titans on Sunday to move to 11-4, winning 55-7. The game, for all intents and purposes, was over by halftime, when the Packers held a 20-0 lead.

Is this a sign of a team pulling it all together at the right time of the season?

Well, yes. There’s reason for optimism and reason to think the Packers are primed for a playoff run.

They passed the ball effectively. Even though Aaron Rodgers was off on a few deep throws, he still piled up 342 yards and three touchdowns through the air. Three guys had more than 60 yards receiving and a fourth, Greg Jennings, caught seven balls. James Jones was the high man with 100 yards.

The Packers rushing attack was effective even without Alex Green, who sat out with a concussion. The Packers rushed for over 100 yards and three different guys scored rushing touchdowns. Ryan Grant led the way with 18 carries for 78 yards and two scores.

The defense didn’t let Tennessee get anything going at all.

They registered seven sacks and two early interceptions of Jake Locker. More importantly, they only gave up 10 first downs.

Locker was the Titans leading rusher on Sunday with 32 yards. Running back Chris Johnson only managed 28. Through the air, Locker passed for just 140 yards and didn’t surpass 100 until there was less than 2 minutes left in the fourth quarter.

Hell, Mason Crosby even connected on both of his field goal attempts.

Can you say total and complete domination?

There are a couple reasons to not get overly excited about Sunday’s win though.

The Packers beat the Titans.

Here’s a team that isn’t very good. They’re now 5-10 and had nothing to play for on Sunday. Did they mail it in?

They certainly didn’t play with a lot of pride.

Perhaps more important is the status of Randall Cobb. Cobb went down after returning a punt in the third quarter. He didn’t return.

The Packers have weapons, but none quite like Cobb.

If anything bad comes out of this win, it will be if Cobb has a serious injury. Regardless of whether he’s healthy, the smart money says Cobb doesn’t play next week.

As things sit right now, the Packers still have a shot at the No. 2 seed in the NFC. A win over the Vikings next week and one San Francisco loss and it belongs to the Packers.

No. 2 seed or not, the Packers look like they’ll be a tough out in the playoffs.

Packers vs. Titans: What to Watch For