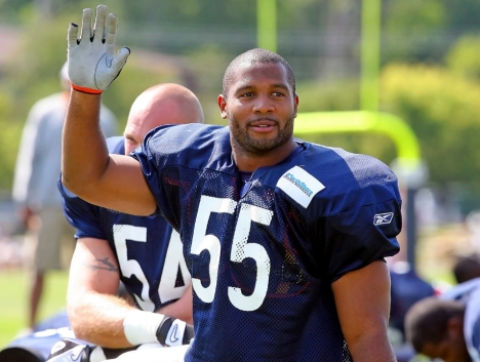 What is this, 1986? Will Forrest Gregg be patrolling the sidelines for the Green Bay Packers looking across at Chicago Bears counterpart Mike Ditka and his sweater vest?

Will Ken Stills be blindsiding Matt Suhey well after the whistle? Will Mark Lee be depositing Walter Payton into the bench? Will Charles Martin be body slamming the Funky QB after he tells us Wisconsin women are fat and ugly?

We’ve lamented the loss of the ferocity that Packers-Bears had in the 1980s. Those days of cheap shots, sticking it to the opposition and pure and unadulterated hatred are gone. Probably forever.

While that’s bad news, the good news is the current Packers-Bears rivalry is finally taking on somewhat of a chippy tone, at the very least.

Yesterday, you had Douchey McDouche, AKA Bears receiver Brandon Marshall, saying how he hated the Packers. The Packers replied as you might expect, basically saying, “We’ll be concerned with what comes out of your mouth when you win some games.”

Then there was Packers tight end Jermichael Finley saying the Bears were better off without injured linebacker Brian Urlacher because he was old and slow.

Well, fellow old and slow linebacker Lance Briggs didn’t think too much of that comment and called Finley an idiot.

“His comments aren’t going to change the outcome of the game, they’re not going to help him or anybody else play better. Doesn’t really matter.”

So, maybe Marshall’s comments WILL affect the outcome of the game. Or, maybe Lance Briggs just has a double standard.

Either way, we’re moving in the right direction here.

Now, if Clay Matthews would just come out with a hit list on his uniform towel, we’d be all set.