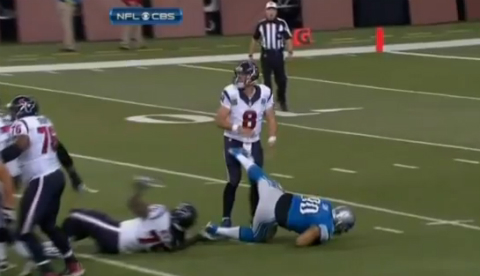 Up until this point, only everyone outside of the Detroit Lions organization was ripping defensive tackle Ndamukong Suh. Now criticism is coming from inside the organization.

Suh has been voted the dirtiest player in the league by peers and the least-liked player by fans. When he isn’t stomping on someone, he’s kicking someone else in the balls, so those labels are well deserved.

You wouldn’t think his own teammates would be ripping him though, but I guess that’s what happens when you go from the playoffs to 4-8.

“Yeah, we’re loaded,” the anonymous player told Jason Cole following Detroit’s last-second loss to the Colts on Sunday. “But we have a couple of guys who don’t understand what it takes to win. Just making a couple of plays and thinking that makes you great … sometimes you want to just shake some of these guys and say, ‘Don’t you get it?’”

“He’s focused for 90 percent of the time,” a teammate said. “But it’s the 10 percent that kills you. … With [Suh], he loses his cool and all of a sudden we’re blowing a play or dealing with some controversy.

“When stars act like that, everybody else thinks it’s OK to act like that,” the player said. “It’s like with kids. You let one get a little out of control, the other one does the same thing pretty quick. It’s human nature.”

The Detroit Lions are a bunch of children. No argument here.

You’re sure to see some of Suh’s idiotic behavior when the Lions face the Green Bay Packers on Sunday.

Chad Greenway Says Something Only a Vikings Player Could