Jeff Saturday Era is Over in Green Bay 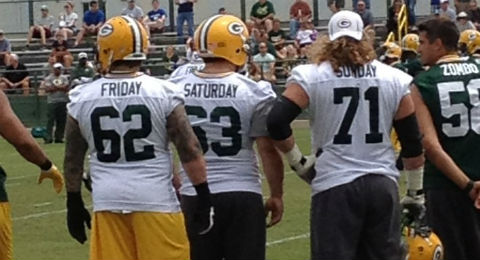 Are you tired of watching center Jeff Saturday get pushed into the Green Bay Packers backfield every Sunday? I know I am. If you’re like me, then we’re both in luck today — the Packers have officially sent Saturday to ride out his career on the pine.

He’s being replaced by Evan Dietrich-Smith in the starting lineup.

Yeah, I know. The payoff could have been better. Dietrich-Smith has spent his fair share of time in the Packers backfield, on his ass and getting burned this season too.

Dietrich-Smith did play fairly well in his last start, against the Lions.

The move to bench Saturday, who was signed as a free agent in the offseason to replace the departed Scott Wells, is possible because of Don Barclay‘s play at right tackle. That allowed T.J. Lang to move back to his best position, left guard.

Dietrich-Smith occupied that spot and Lang played right tackle after Bryan Bulaga went down for the season. Lang’s injury allowed the Packers to find out what Barclay could do.

“As a player, it’s always disappointing whenever someone else goes in front of you. It’s a tough thing to deal with, but I’m going to deal with it. Here’s the one thing: I can look at my family, I can look at all my players and say I put the best I could be out there. If that’s not good enough and somebody else is better, then they deserve to play. And I’ve always felt like that. I respect (Dietrich-Smith) enough to say if this is his (opportunity), then he needs to take it and go do a good job with it.”

At 37, the Packers were looking at Saturday as a one or two-year starter when they signed him. He got a two-year deal worth nearly $8 million. However, it didn’t include a signing bonus and instead had some fairly beefy non-guaranteed bonuses.

So when the Packers cut Saturday in the offseason, they’ll owe him nothing and gain $3.75 million in salary cap space in 2013. That should make it easier for the Packers extend guys like Clay Matthews and Aaron Rodgers.

Anyway, here’s one for the road, Captain Fantastic!