It Pains Us, But Adrian Peterson is NFL MVP 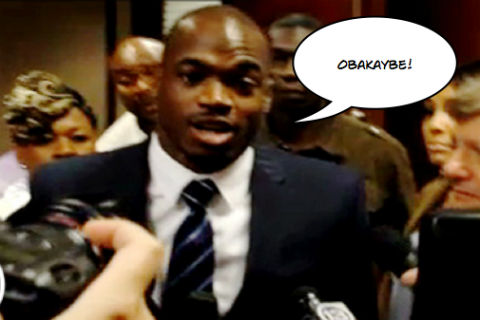 You know there’s nothing we hate more than the Minnesota Vikings and their idiotic fans, so it pains us to say this, but there’s no more avoiding it — Adrian Peterson is the NFL MVP.

It shouldn’t even be close.

Peterson’s chief competition seems to be Denver quarterback Peyton Manning and his giant forehead and, to a lesser degree, the Packers Aaron Rodgers and Patriots Tom Brady.

We’re going to go out on a limb and say it’s a two-man race and we’re also going to tell you why Corporate Shill/Manning Face doesn’t belong in the conversation.

Peterson ranks first in rushing (by 400-plus yards!), second in rushing touchdowns and second in yards per carry among running backs.

You could argue Manning isn’t even the best player at his position in the NFL this season. You could not argue that Peterson isn’t the best at his. He is. Far and away. By about 400 yards, in fact.

It should be noted that Peterson is currently 102 yards away from 2,000. Only six other guys in history have achieved that milestone. He’s also 208 from Eric Dickerson‘s single-season NFL mark.

If Peterson attains the latter mark, which we doubt he will, then this conversation isn’t a conversation at all. Peterson is the slam dunk choice for MVP.

Assuming he won’t gain 208 yards against the Packers on Sunday, here’s why Peterson is the better choice than Manning, beyond just the stats.

It really comes down to this.

The Vikings are a dried-up pig turd without Adrian Peterson. The Denver Broncos are fine without Peyton Manning.

Quick — name me three players on the Vikings not named Adrian Peterson.

Christian Ponder? Good one. At least he married a hot chick.

Jared Allen? Okay, but even that dumb hillbilly has had an off year by his standards.

The point is, everyone on the Vikings sucks donkey teat. Everyone not named Adrian Peterson, that is. That’s what makes what Peterson did all the more impressive. He had no help. Do you think teams were playing two deep all season to shut down the Vikings vaunted passing game?

No. The Vikings only have a vaunted passing attack in Christian Ponder‘s dreams.

Opposing defenses were stacking eight in the box to try to stop Peterson all day long. Didn’t work.

What about the Broncos?

They actually have some talent. Demaryius Thomas, Elvis Dumervil, Champ Bailey, Von Miller, etc. They also have the third-ranked defense in the NFL (the Vikings are 16th).

Remember, the 2011 Denver Broncos were 8-8 and won a playoff game with the worst quarterback in the history of the NFL, Tim Tebow, at the helm.

Clearly, Manning improved that situation dramatically. However, he didn’t carry a bunch of losers like Peterson did.

Without Manning, the Broncos are still 8-8 this season, which is more than good enough to make the playoffs in the AFC West. Without Peterson, the Vikings are 3-13.

Couple that with the fact that we’d rather lick sweat off an old woman’s bunions than admit the Minnesota Vikings did anything positive and it’s pretty clear this is an open and shut case.