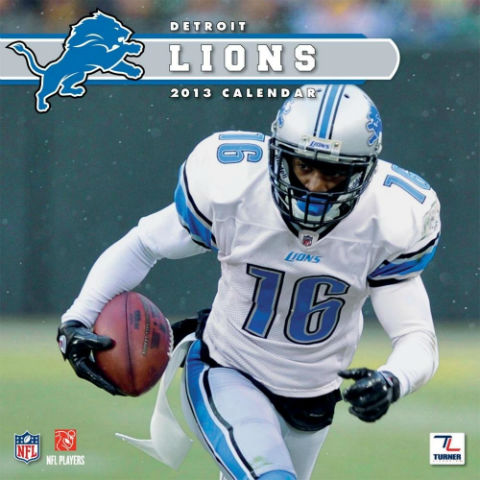 The Detroit Lions can’t even get their 2013 calendar right.

Like every NFL team, the Detroit Lions have a 2013 team calendar with action shots and whatnot of their “star” players. This product is sanctioned and approved by the NFL.

So who’s on the cover?

If you recall, the team sent Young home earlier this season for tanking plays against the Green Bay Packers. They’ve since put him on injured reserve (even though he’s not really injured) and his coaches have trashed him publicly.

It’s now a foregone conclusion Young will not be back with Lions next season. However, fans will still be able to savor his time in Detroit by seeing him on the front of the team calendar.

The follies don’t end there.

Aaron Berry, who was arrested twice and then released by the team last summer, is featured for the month of January. Two other months feature guys who may or may not be with the team in 2013 as well — Kyle Vanden Bosch, who’s overrated and will probably end up being cut in the offseason, and Jahvid Best, a running back who has hardly played the past two seasons because of concussions.

In defense of the people who put this POS calendar together, we had no idea the Lions would implode like this either. Of course, we’re probably happier than they are that happened.

Here are some comments on the calendar’s Amazon page:

You must fire everyone involved with the making of this calender. This is a disgrace. DO NOT BUY!!! DO NOT BUY!!!

LOL…this calendar is right up there with…well with nothing. Former Lion’s players? Yup! Players sent home and told not to return because their attitude sucks? We got em! Players who will likely never play again? Oh yeah baby! Team Super Bowl history? Of course!…oh wait, Detorit’s never been to the Super Bowl. Um yeah…this is a great deal.

Oh yeah, there’s a section in the calendar that talks about the Lions’ Super Bowl history… hahahahahaha!