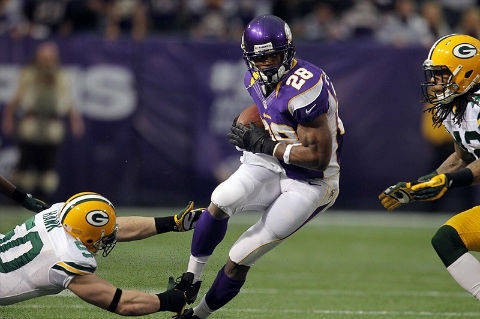 Now that the dust has settled and the hangover has worn off, here are five more thoughts on the Green Bay Packers 37-34 loss to the Minnesota Vikings.

Too bad about that record
Adrian Peterson came into yesterday’s game needing 208 yards to set the all-time single-season NFL rushing mark. Last week, we surmised he had no shot. Clay Matthews and C.J. Wilson didn’t play when the Packers gave up 210 to Peterson in the first matchup this season. They did play on Sunday. Didn’t make a difference. Peterson ran for 199. He didn’t get the record, but I wish he would have. The Packers defense was so bad, they deserved to have the shame of surrendering such a mark hung around their necks.

A.J. Hawk returns to form
Remember when he praised linebacker A.J. Hawk last week after he turned in his one and only good game of the season? What did he do? He went out and shit the bed. He was a fucking embarrassment to people who actually play football. He gets totally pushed out of the play anytime anyone blocks him. When he isn’t getting pushed around, he’s getting trucked by a running back, who may or may not trip over him while they’re running over him. His running mate at inside linebacker, Brad Jones, isn’t much better. I know Desmond Bishop and D.J. Smith will be back next season, but the Packers need to seriously consider drafting an inside linebacker who won’t be Adrian Peterson’s bitch. Like, in the first round.

What’s up with Casey Hayward?
The guy is a legitimate candidate for  defensive rookie of the year, but how many times did someone point out that Hayward was a rookie yesterday. I’ll tell you — too many. A rookie who’s played as much as Hayward has, shouldn’t look like a rookie in week 17. He looked lost at times, yesterday. Of course, most of the defense looked befuddled and undisciplined, so maybe it’s just a symptom of shitty preparation.

Good thing Charles Woodson didn’t play
Yeah, we get it. The Packers are being cautious with Woodson, who broke his collarbone about 85 weeks ago. He was supposed to return for the Bears game, so you’d think he would have been able to play this week. The Packers apparently thought they could beat the Vikings without Woodson. They were wrong. Had Woodson played, the outcome may very well have been different. Fewer missed tackles and Christian Ponder probably wouldn’t have looked like Jesus H. Christ. No Woodson, no No. 2 seed.

Enough with the finger wag, B.J. Raji
The big man had a pretty nice game. When the Packers were able to stop Peterson, Raji usually led the charge. He had two tackles for a loss on Sunday. Each time he made a stop, he got up and wagged his finger back and forth as if to say, “don’t run here.” He also did it when he was nowhere near the play. And he did it to the crowd, not to anyone on the Vikings. Did Dikembe Mutombo wag his finger at the crowd after he blocked a shot? No, because the crowd didn’t shoot the ball. He wagged it at the guy he was elbowing in the face all game long. So not only are you not doing it right, you’re doing it when you shouldn’t, B.J. You should leave the celebrations to Clay Matthews.