Chad Greenway Says Something Only a Vikings Player Could 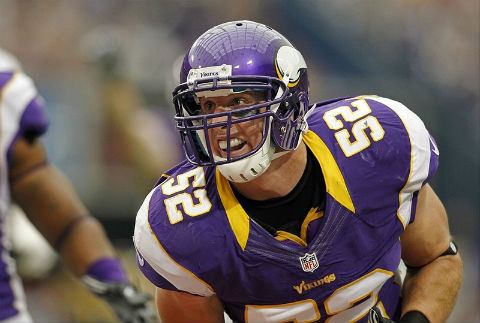 The Minnesota Vikings play host to the Chicago Bears this weekend in what is essentially a playoff elimination game for them.

The Vikings are tied with three other teams at 6-6 and one game behind Seattle for the final wild card spot in the NFC. If they lose to the Bears, they’re probably going to need to win out and get a lot of help to make the tourney.

First of all, is there any way possible both of these shitbag teams could lose on Sunday?

Anyway, Vikings linebacker Chad Greenway has some brilliant advice for his team’s beautiful and intelligent fans.

“We have to play accordingly and our fans have to show up accordingly, which we know they will,” he said after Sunday’s loss at Green Bay. “Hopefully, they’re super- duper drunk. … So drink liquor, not beer.”

Well, that’s certainly not a PSA you see attached to a noon kickoff.

“Yeah, I would say morning drinking,” Greenway said. “Why not? You could pull an all-nighter. Then you’d have the drunk, tired guys who will really be obnoxious.”

I can hear the Vikings fans already… “Der, youse guys drink more an we do! Skooooool!

Perhaps, but no one on the Green Bay Packers would ever suggest that our fans show up drunk. Is that because our organization and players actually have some class?

Well, yes, but it’s also because our fans aren’t bunch of moronic turds that have to be told, 1. to actually show up for the game, and 2. that they should cheer loudly at the game.

We do those things without prompting.

Of course, we’re sure everyone in Minnesota will take this to heart and you know what that means — post-game runs to Aldi to grab more Hormel Chili, a tenfold rise in domestic abuse complaints, lots of chili and blood-stained wife beaters and probably a shortage of Hamms.