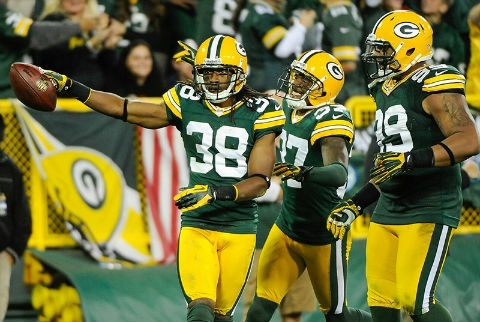 Whether it was intentional or not, Green Bay Packers cornerback Tramon Williams is now engaged in an idiotic war of words with Seattle Seahawks cornerbacks Brandon Browner and Richard Sherman.

Well, because he’s a fool.

Williams called himself Optimus Prime this week because he’ll be matched up with Detroit Lions star receiver Calvin Johnson, AKA Megatron, on Sunday. Sherman played that card earlier this season.

Before Seattle faced Detroit, Sherman changed his Twitter name to Optimus Prime. So, yeah, Tramon, that’s already been done. Tramon didn’t stop there though. He went on to bash Sherman and Browner, presumably when someone told him his Transformers reference was played.

“Guys like (Seahawks corner) Brandon Browner and Richard Sherman – they talk about how physical they are — but Calvin was pushing those guys around the field like it was nothing. And those are some big guys. You definitely have to be careful with how you play a big guy like that.”

Sherman was quick to fire back.

“Yeah, we were pushed around to the tune of 46 yards, I believe,” Sherman said, via Around the League. “Not too much pushing. I don’t understand that shot, he took a shot at us. Last I checked, we’ve never given up 250 yards to anybody. We barely give that up in a game. To give that up to one player, I mean that was the last time they played him I believe. I don’t really know if he’d be the one (to) come talk to us about playing coverage.”

Johnson caught just three balls for 46 yards against Seattle. The last time he faced the Packers — in week 17 of last season — Johnson caught 11 for 244.