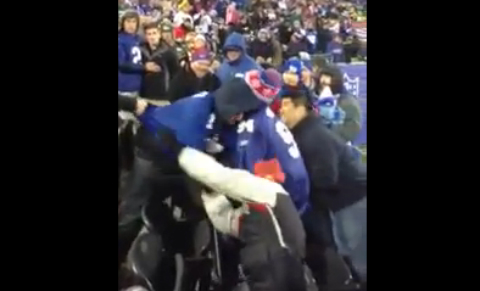 As if getting blown out by the New York Giants wasn’t humiliating enough, we now have video of a Green Bay Packers fan seemingly getting his ass handed to him by some hoodlum in the stands.

Although there isn’t really any preface to this fight and the supposed Packers fan doesn’t have any discernible Packers colors visible, TBL says it’s Giants on Packers violence.

Hell, it could just be two idiot Giants fans taking swings at each other for all we know. What we are certain of is the idiot who recorded it (or someone very near him) was yelling “world star” during the entire melee.

Anyway, we don’t blame these tools for finding another way to amuse themselves. There was nothing interesting happening on the field.