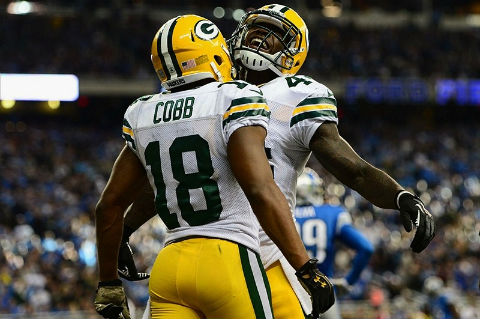 There was nothing pretty about it, but the Green Bay Packers escaped with a 24-20 win over the Detroit Lions to improve to 7-3.

On a day when the Packers offense was surprisingly inefficient and Mason Crosby missed two field goals, the defense played surprisingly well despite the absence of outside linebacker Clay Matthews.

Rookie Dezman Moses, who started in place of Matthews, recorded a sack and forced fumble. His counterpart, Erik Walden, had six tackles and two sacks.

Although cornerback Tramon Williams — or Optimus Prime if you like — was invisible, rookie Casey Hayward picked off his fifth pass of the season and M.D. Jennings snared his first, which he returned for a 72-yard touchdown in the third quarter.

On offense, the only two Packers who looked like they came to play were receiver Randall Cobb and — surprise! — tight end Jermichael Finley.

Cobb hauled in the game-winning touchdown with 2:30 left in the fourth and had a team-leading nine catches and 74 yards on the day. He added another 19 on the ground.

Finley, meanwhile, scored his first touchdown since week one on a 20-yard catch and run in the second. On the play, Finley looked like the Jermichael of old, plowing through several Lions to reach the end zone. He finished with three for 66.

The yardage represents his highest output of the season.

Overall, the Packers offense looked weak. Aaron Rodgers was sacked three times and was under pressure most of the day. You could argue that was a symptom of the play calling.

With both of their starting safeties out, Detroit’s game plan was to take away the vertical passing game. That left the underneath passes open, but much like he’s done all season, Mike McCarthy continued to try to go vertical. It didn’t work.

Frankly, Finley should have had a much bigger day than he did. If only the Packers would have worked the underneath routes…

Still, the Packers did enough to win. If it weren’t for Crosby’s continued struggles — he missed two of three attempts on the day — the game may have been over with a little bit earlier.

As it stands, the Packers maintained their one-game lead over Minnesota and are in position to take over the division lead if Chicago loses to San Francisco on Monday night. The Lions, who are now 4-6, can likely kiss their playoff changes goodbye.

Previous Article
Packers vs. Lions: What to Watch For
Next Article
Mason Crosby, You’re Fired!