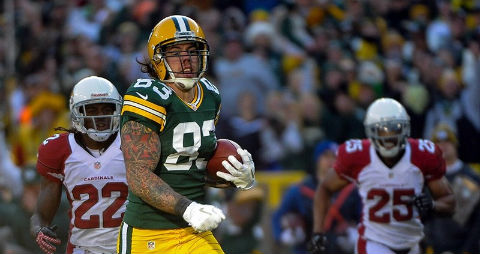 Now that the dust has settled and the hangover has worn off, here are five more thoughts on the Green Bay Packers 31-17 win over the Arizona Cardinals.

Morgan Burnett is becoming pretty good
The Packers third-year safety has really stepped up since Charles Woodson went down. He had seven tackles on Sunday. He had 11 the week before, while also registering a sack and forced fumble. Burnett has improved in coverage and is solid supporting the run. He may not be in Woodson’s league, but Burnett has been the backbone of the Packers defense since the future Hall of Famer got hurt.

The Packers have (maybe) figured out how to run the ball
We’ve been beating up the offensive line for several weeks now. Against Arizona, the Packers finally got a running game going. They did it primarily by handing the ball to James Starks and using Alex Green as a change of pace. Starks is a banger who runs straight ahead and much like Cedric Benson, that style seems to work to the strengths of the offensive line (whatever those are). Starks had 61 yards on 17 carries. Green had 53 on 11. Randall Cobb got three carries for 29. Look for more of that mix going forward.

Tom Crabtree, WTF?
You know what we expected from Tom Crabtree in the passing game this season? Next to nothing. Instead, we’ve gotten this so far: six catches, 183 yards and three touchdowns. That’s 30.3 yards per catch. The Packers big-play threat? It’s not Jordy Nelson, Greg Jennings or Jermichael Finley. It’s Tom Crabtree. Maybe the Packers should throw this guy the ball a little more. Finley is only averaging 9.3 per catch and only has one touchdown.

There’s something wrong with the pass defense
You’ve heard this one before, haven’t you? Like all of last season? Well, there’s still something wrong. Whether it’s the scheme, personnel or loss of Charles Woodson, it’s hard to say. We do know this though. Good defenses don’t give up 300-plus passing yards to guys like Blaine Gabbert and John Skelton and they certainly don’t do that in back-to-back weeks. These guys wouldn’t be starting for most of the teams in the NFL, but they both looked awfully good against the Packers.

Brad Jones — maybe not so bad after all
Although we never really questioned whether he was any good, we did wonder why Brad Jones was starting at inside linebacker instead of Robert Francois or Jamari Lattimore. Well, he led the Packers in tackles on Sunday with nine. He was second the week before with 10 (he also recorded a sack and forced fumble). He’s not always great in coverage, but it looks like Jones was the right choice at inside linebacker and he’s definitely earning his keep.