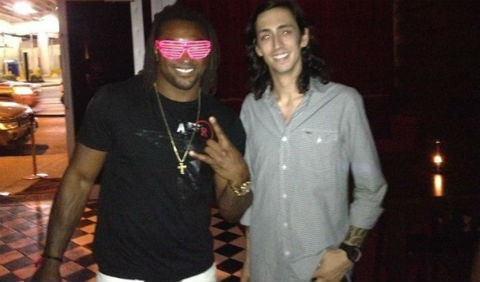 Cedric Benson has been on injured reserve since October 10 with a Lisfranc injury in his foot. What has the Green Bay Packers best runner been doing in his free time?

Spinning records at clubs in Austin.

Benson, who goes by DJ World Peace, apparently is into house music and last performed on Nov. 10 at The Madison. He had a show earlier that week at The Yellow Rose, an Austin gentlemen’s club.

A gentlemen’s club! The horror!

Why isn’t this clown rehabbing his injury, you’re probably thinking. Well, it looks like he only performed in Austin during the Packers bye week. His previous gigs were in August, which is while he was still on the NFL unemployment line.

Benson is eligible to come off injured reserve in week 14. It would be great to have him back, but I guess we’ll just have to settle for some of his funky cuts for now.