Refs Were a Theme For the Packers Again 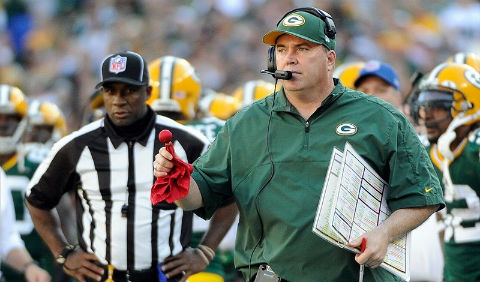 We noted the number of bad calls in the Green Bay Packers win over the New Orleans Saints. After the game, the Packers made note of them as well.

A week after getting robbed of a win by the (replacement) officials in Seattle, the Packers didn’t fare much better with the real officials back in the fold. Overcoming that adversity was a theme in the locker room.

“I guess we finally beat ’em tonight, and that’s the referees,” tight end Jermichael Finley said. “We just can’t bow down and get in the referees’ game, the game they want to play. We can’t worry about what they’re calling or what they’re doing over there.”

“We can’t sit on the sideline and boo, so that’s what the fans are for, to get into it, make it nice and loud in there (and) boo them so hopefully we get a call on our side,” wide receiver James Jones said. “Everybody saw it. Obviously they missed a couple calls.”

Among the blown calls was Darren Sproles’ fourth-quarter fumble on a kickoff return. Sproles was ruled down before the ball came out. He clearly was not, but the Packers didn’t have any challenges left at that point.

“I was actually right there (and) I was going crazy, like most of the stadium,” B.J. Raji said of the referee’s ruling that it was not a fumble. “It was unfortunate that (it happened on) a clear call like that. Everyone has to answer to somebody, so I’m guessing, hopefully they have to answer to somebody.”

Ultimately, the Packers did enough to win, which kept them out of a hole like New Orleans finds themselves in.

“I think 1-3 would have been very difficult,” quarterback Aaron Rodgers said. “When you start having consecutive losses, you can’t help but having that thinking of, ‘Here we go again’ at times. Unfortunately, there was a little bit of that tonight with some of the calls, but we were able to overcome it.

“I think it says a lot about the character of this team. This was an important win for us.”

Hopefully, we’re not talking about this theme again next Monday. It’s about time some calls start to go the Packers’ way, right?