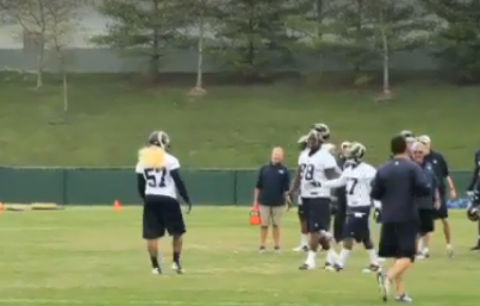 Clay Matthews should probably consider this a compliment. The St. Louis Rams dressed one of their practice squad guys in a blond wig at practice today in order to help them prepare for the Green Bay Packers linebacker.

The wig was a cheap, curly number, but the message was pretty clear: Pay attention to the guy with the long blond hair.

“That’s a team-issued deal,” Rams coach Jeff Fisher said. “I’ve done that in the past, particularly with Troy Polamalu. When you’re playing great players like Polamalu and Matthews, you like to know where they are on the field, and that helps.”

Linebacker Sammy Brown, who got the honor of pretending to be Matthews, didn’t really enjoy the new hair.

“I had to take it off,” Brown said. “That thing was burning my face.”

Previous Article
Oh My God, Aaron Rodgers is Injured!
Next Article
Packers Are Wounded, But That Won’t Matter