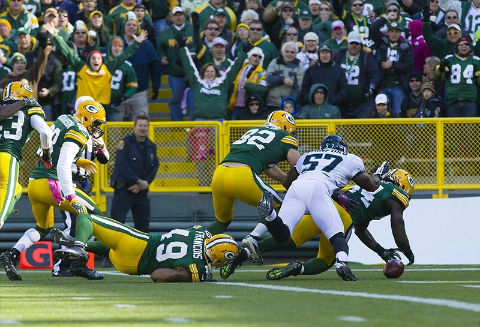 Apparently, this is how bad the Jacksonville Jaguars are. When cornerback Davon House blocked a punt in the second quarter, the Green Bay Packers had only 10 men on the field.

Receiver Jarrett Boykin, who got his first playing time on offense this season, was supposed to be the 11th, but forgot to go on the field for the play.

Of course, that didn’t stop House, who came through clean and got the block, which was recovered by Dezman Moses for a touchdown.

What’s worse than getting a punt blocked with a man advantage, is the Jaguars even took notice of House before the play.

“They called it out, so I don’t know if they just blocked it wrong or what,” House said. “But I came scot-free. No one touched me at all. When I motioned in, they said something and they pointed at me, and I still came in free.”

A comedy of errors.

That’s what happens when you’re the worst team in the NFL.