Mike Neal is Back… Kind Of 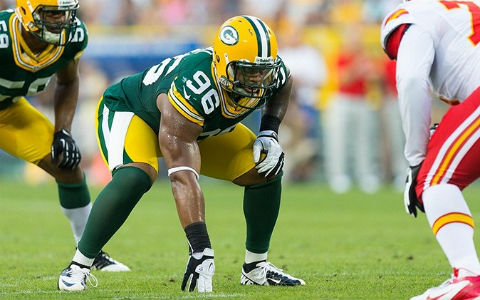 Green Bay Packers defensive end Mike Neal returned this week from his four-game suspension for violating the NFL’s substance abuse policy. He still hasn’t been added to the active roster though.

The Packers have a one-week roster exemption to figure out what to do with Neal, meaning they don’t have to make a roster move with him until next week.

Of course, Neal wants to play this week.

Coach Mike McCarthy said Neal looked fresh in practice and it’s pretty clear he stayed in shape during his time away from the team. It doesn’t look like the Packers have ruled out the possibility of activating him this week.

If they did that, they’d have to release someone from the active roster to make room for him. Leading candidates would appear to be rookie safety Sean Richardson, who was a surprise addition to the final roster and has been dealing with injuries of late, and defensive end Phillip Merling, who’s the low man on the defensive line rotation totem pole.

Of course, the Packers could simply wait until after this week’s game to assess the situation or they could decide they like the players they have and release Neal, which wouldn’t be a huge surprise.

The former second-round pick has been injured for much of his time in Green Bay and when he’s been healthy, he’s also been completely ineffective.

If there’s any positive in that, it’s that Neal is totally motivated to prove himself.

One Replacement Ref Says They Screwed up Packers-Seahawks

One Replacement Ref Says They Screwed up Packers-Seahawks