Lions Will Not Be Competing For Division Title 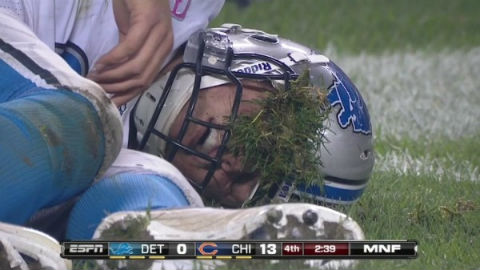 Coming into the season, everyone thought the Detroit Lions were pretty good. Hell, they made the playoffs last season for the first time since Abe Lincoln was president.

The smart money said the NFC North would turn out something like this:

The shot from last night’s Bears-Lions game pretty much sums it up. If there was snow on the ground, these guys would be getting their faces rubbed in the yellow spot.

They put up a whooping seven points last night in a 13-7 loss to the Bears.

On one hand, you might say, “Hey, great defensive effort!” Of course, then you’d have to say, “Wow. Our fucking offense sucks.”

Fortunately, we are not Detroit Lions fans and never will be, so we don’t have to say anything. We’ll just sit back and laugh at your misfortune.

Don’t worry though, you still lead the league in arrests this season.