by Monty McMahon
in Uncategorized
25 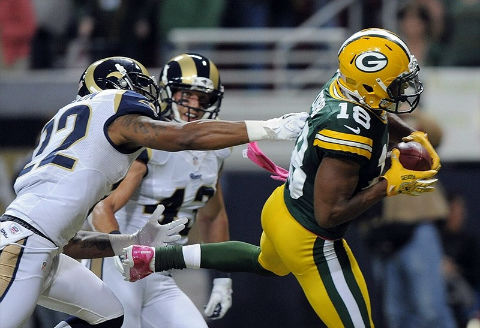 The good version of the Green Bay Packers showed up for the second Sunday in a row. That was bad news for the St. Louis Rams, who were 3-0 at home before the Packers overwhelmed them 30-20.

I say overwhelmed because, let’s be honest, the Packers should have won this game on talent alone. Even with four key starters out, they have more playmakers than the Rams.

More importantly, this was more of what we saw last week from Green Bay, when they crushed the previously undefeated Texans.

The Packers also featured Alex Green for a second week in a row. Although it didn’t pay off in rushing yards — Green averaged only 1.75 per carry (20 for 35) — it at least kept the Rams honest.

On defense, the Packers were lackluster at times. Wwe’ve been throwing the overrated label around when we talk about B.J. Raji, the Packers D is definitely better with him in the lineup.

Although he isn’t a game-changing force, Raji gives the defensive line depth. When the Packers lost Mike Neal to injury on Sunday, they didn’t have much depth, couldn’t substitute and the few guys they had were getting pushed around because they were on the field sucking wind.

The defense did enough though.

They sacked Sam Bradford three times (Clay Matthews, Erik Walden, Dezman Moses) and Casey Hayward came up with an opportune interception — his fourth of the season — in his first start of the year.

We should also point out that Davon House looked good in his first action of the season.

Despite how well the Packers offense is playing, special teams might be the team’s top unit.

Outside of the first half punt return he was pushed totally out of bounds on and never came back in before tackling the returner, Jarrett Bush is a special teams stud. Not only did he make up for that play by cutting the Rams kick returner down short of the 20 late in the game, but he was also responsible for the Packers on-side kick recovery earlier in the game.

On that play, Bush completely trucked the guy going up for the ball. That guy landed on his head (and hopefully will walk again), had no shot to make the play and the Packers were all over the loose ball at that point.

It only took him six years to figure it out, but Shawn Slocum finally has a top-tier special teams unit. Three years ago, the Packers wouldn’t have thought about trying a fake field goal or an onside kick early in the game. This year they not only try those things, they execute them perfectly.

At 4-3 the Packers are finally starting to look like the team everyone expected them to at the beginning of the season. They should thrash Jacksonville next week in their return to Lambeau. They should throttle Arizona the week after and go into their bye at a healthy 6-3.

Things are finally starting to get back to normal.

On a final note, this has to be asked.

We highly fucking doubt it.

Packers vs. Rams: What to Watch For