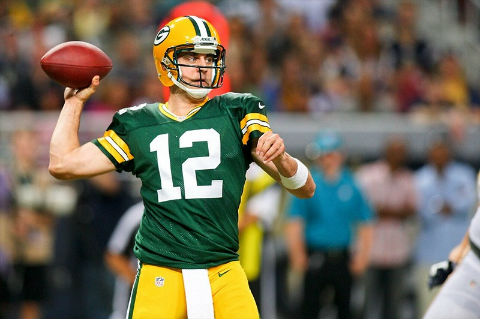 Now that the dust has settled and the hangover has worn off, here are five more thoughts on the Green Bay Packers 30-20 win over the St. Louis Rams.

Words cannot describe how bad the Packers offensive line is
Aaron Rodgers was sacked three times on Sunday, but that really doesn’t tell the full story. How about this? Alex Green got 20 carries and gained only 35 yards. Why? Because he was consistently getting hit behind the line of scrimmage. Did anyone notice T.J. Lang getting pushed five yards backwards by one guy several times on Sunday? Has anyone noticed that Bryan Bulaga has actually gotten worse this season? That’s not to mention the guys that consistently run around Marshall Newhouse or the idiotic penalties. These guys are bad. Good thing the Packers have locked most of them up long-term.

Sam Shields’ injury just might cost him his job
Casey Hayward, starting in place of Shields on Sunday, came up with his fourth pick of the season. All four of those have occurred in the past three games. Hayward is starting to look good out there. He also looks like he has the potential of a future shut-down corner. The Packers can’t keep him out of the starting lineup for much longer.

Jermichael Finley is clearly no longer a focal point
Remember a couple years ago when the Packers designed their whole offense around Finley? Those days are gone. Finley caught two balls for 31 yards on Sunday. Surprisingly, he didn’t drop any, but that’s beside the point. Finley is clearly no longer option one or two in the Packers offense. Right now, he’s option four, behind Jordy Nelson, Randall Cobb and James Jones. When Greg Jennings returns, he’s option five.

Aaron Rodgers’ MVP form is officially back
The guy has thrown nine touchdowns and no interceptions over the past two weeks. Nine. He’s also throw for 680 yards and completed 70 percent of his passes over that span. I think it’s safe to say Rodgers is back in the MVP conversation.