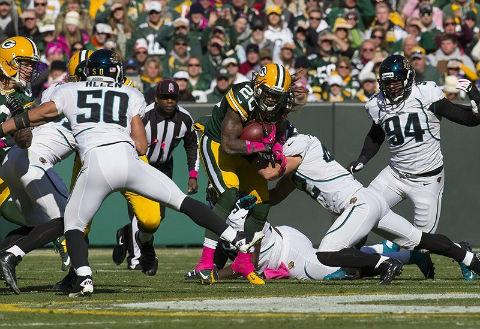 Now that the dust has settled and the hangover has worn off, here are five more thoughts on the Green Bay Packers 24-15 win over the Jacksonville Jaguars.

There may never have been a game that was this unexciting
The players were not excited. Most of them looked like they were just going through the motions and it showed in the final product. The Packers should have blown these assholes out, but they played with zero passion (with perhaps the exception of Morgan Burnett and Brad Jones). In turn, the fans weren’t excited. The stadium was rarely loud and the game was almost unbearable to watch on television. Way to not give a shit, Green Bay.

I don’t care what the coaches say, the offensive line is terrible
Mike McCarthy and his minions fed all kinds of drivel to the local media about how good the offensive line has been playing. And of course, being the lap dogs they are, they actually published this crap. We got stuff like, “Bryan Bulaga has been great except for that one sub-par game in Seattle.” I’ve got news for you, no he hasn’t. He’s been shit. “Marshall Newhouse has turned the left tackle spot into a strength.” Really? As long as he isn’t facing a speed rusher, I guess. And these two guys aren’t even the weak links on the line. T.J. Lang and Jeff Saturday, I’m looking at you. Alex Green carried 22 times for 54 yards on Sunday. That’s a paltry 2.5 yards per carry. It’s also an improvement over what he did last Sunday, when he averaged only 1.75. We all know Green can break one and we’ve been waiting patiently, but no back can do shit when he ALWAYS takes first contact behind the line of scrimmage.

Special teams are playing better than they ever have under Mike McCarthy, but…
The Packers third unit has traditionally been atrocious since McCarthy has been the Packers coach. More specifically, they’ve been a joke under Shawn Slocum. However, Slocum has somehow put together what may be the best special teams unit in the NFL this season. You’ve got Randall Cobb on returns, an ace cover guy in Jarrett Bush, a solid punter (and a kicker that used to be solid until he started shanking the hell out of everything), and they’ve successfully pulled off several fakes this season. All that being said, the fake field goal where Mason Crosby was split out wide and Tim Masthay played quarterback was a little much. You’re getting a little too cocky, Mike.

We’re not sure what Charles Woodson’s absence means yet
The Packers secondary was torched by a below-average quarterback to the tune of 303 yards on Sunday. A lot of people will be quick to say it was because Charles Woodson wasn’t playing. That may be the case, but it was also because the Packers defense can’t play zone. They couldn’t play it with Woodson and they sure as hell couldn’t play it without him. Why do they keep using zone instead of going man-to-man? It certainly isn’t because they don’t have athletic corners. I guess it’s the “they’ll get it eventually” philosophy. The point here is, we still don’t know what Woodson’s absence means to this defense.

Donald Driver — the Packers sixth receiver
Yes, the beloved, venerable DD caught a touchdown on Sunday and good for him. It’s a nice feel-good story. The more interesting thing was this: it appears Driver is now the Packers sixth receiver. With the Packers down to four healthy receivers, everyone expected Driver to be the third guy, but it certainly looked like rookie Jarrett Boykin was on the field first. We don’t have the snap counts, but it also seemed like Boykin played more than Driver. That doesn’t really bode well for Driver’s plan of playing next season.