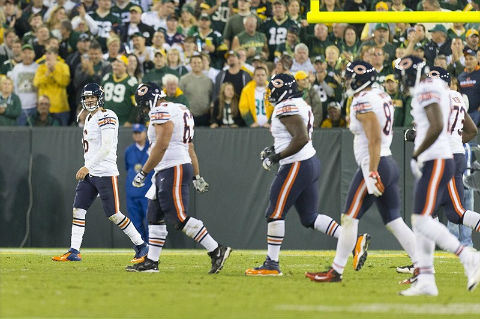 You probably remember when Chicago Bears quarterback Jay Cutler was yelling at tackle J’Marcus Webb last Thursday. Now one of his teammates is publicly criticizing him for the incident.

“I just think it’s wrong, honestly,” Moore said. “I would feel some kind of way if he were to do me like that and make it seem like ‘well, the reason that I’m having a bad game is because what you’re doing and not me taking accountability for myself because I’m throwing these types of passes or doing this type of read.’

“So it’s a tough situation. When you act like that with your own teammates on the sideline, it’s just something different that you normally wouldn’t do. So you might say it in the locker room or something, but to do it like he did it, it’s just weird.”

Obviously, Cutler is a real endearing figure in the Bears locker room.

We’re sure this will do wonders for team unity and morale.