Packers Are Not Who We Thought They Were 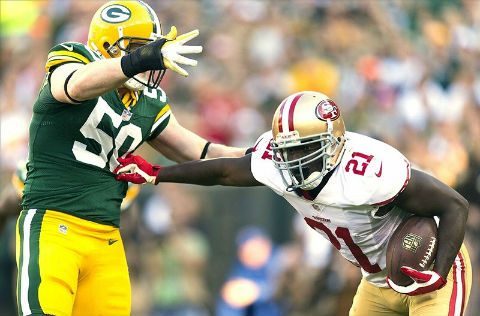 The Packers more or less sucked it up on both sides of the ball in a 30-22 loss to the San Francisco 49ers at Lambeau Field. The Packers defense couldn’t stop the 49ers’ running game, or their passing game when it counted, and the Packers offense was lackluster versus the 49ers’ stout defense.

Niners running back Frank Gore ran for 112 yards and a TD, mostly because the Packers D let him bounce off defenders most of the game like a pinball. Safety Morgan Burnett is the guy who should be specifically singled out here — he was touted as a potential Pro Bowl player in the preseason by the coaching staff. They overlooked one important factor — he’s too stupid to try to wrap someone up when he’s making a tackle. He’d rather just run into the guy and leave the rest to chance.

With that being said, did anyone notice Jarrett Bush?

Bush got the PT at cornerback opposite Tramon Williams. We’ve been critical of Bush in the past, but he’s earned his stripes.

That is… until we noticed him Sunday afternoon.

Bush was the victim on several 49ers’ first-down completions during the game.

Did he play terribly?

But he was exposed, mostly because…

No one outside of Clay Matthews can rush the quarterback.

Matthews had 2.5 sacks during the game. Are you aware of how he got those sacks?

It wasn’t because there was a stout pass rush coming from the other side. In fact, Nick Perry — the Packers first-round draft choice — didn’t do anything of note, other than get abused in the passing game.

It will be interesting if Erik Walden, one of the Packers’ best pass rushers in the preseason, gets the start in place of Perry next week when he returns from his one-game suspension.

Jerel Worthy, B.J. Raji, C.J. Wilson… anyone else on the Packers defense? They couldn’t get to Alex Smith either.

Everyone says Dom Capers is a great defensive coordinator. We like to believe that, but it might be tough to run a defense when you only have two good players…

Does anyone recall anyone on the Packers defense other than Charles Woodson or Matthews making plays consistently?

Speaking of, how about the offense?

Aaron Rodgers was obviously still in preseason mode and we’d like to think the coaching staff was too. No one expected the Packers to run the ball very much, but, hey, let’s throw deep as much as possible!

Was that really the game plan? Throw deep on the 49ers?

The middle was open all day. When he wasn’t working perfectly as a decoy, Randall Cobb was making plays all day. Yet, Rodgers consistently thew deep into coverage. It was like trying to shove a square peg into a round hole, but the Packers kept going after it.

There doesn’t really seem to be any other explanation.

The bottom line is this.

The Packers offense didn’t even come close to its top-tier billing. The Packers defense was pretty much what it was last season. The only highlight was Randall Cobb.

Add it up and the Packers lost to a better-prepared, better-executing team on Sunday, in the form of the San Francisco 49ers.

As of right now, the NFC Championship game goes through Candlestick.