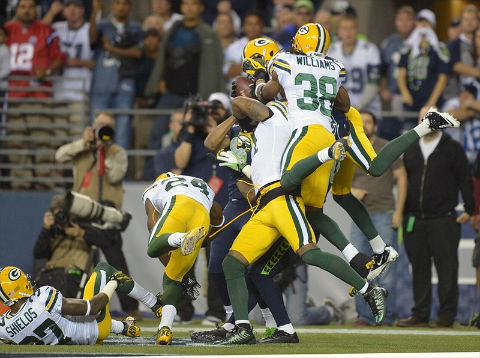 The NFL released their statement on the final call of the Green Bay Packers “loss” to the Seattle Seahawks.

Predictably, these shitfucks stood behind their pretend officials. They did, however, acknowledge the blatant offensive pass interference call on Golden Tate that wasn’t called prior to the fuckjob of a call that handed Seattle the win, even though M.D. Jennings clearly made an interception.

Here are the important parts.

While the ball is in the air, Tate can be seen shoving Green Bay cornerback Sam Shields to the ground. This should have been a penalty for offensive pass interference, which would have ended the game. It was not called and is not reviewable in instant replay.

When the players hit the ground in the end zone, the officials determined that both Tate and Jennings had possession of the ball. Under the rule for simultaneous catch, the ball belongs to Tate, the offensive player. The result of the play was a touchdown.

Replay Official Howard Slavin stopped the game for an instant replay review. The aspects of the play that were reviewable included if the ball hit the ground and who had possession of the ball. In the end zone, a ruling of a simultaneous catch is reviewable. That is not the case in the field of play, only in the end zone.

Yeah, the only problem with that explanation is there wasn’t simultaneous possession. Not even close.

Vote With Your Wallets, People