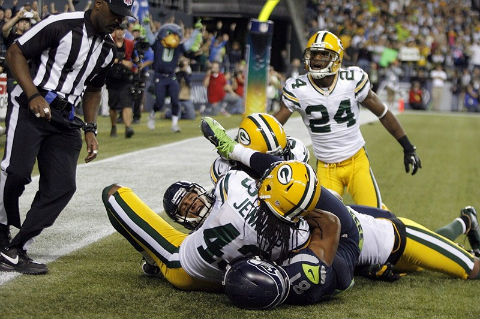 After letting the hangover wear off and a little reflection… we’re still fucking pissed. Nonetheless, here are five more thoughts on the Green Bay Packers 14-12 “loss” to the Seattle Seahawks.

1. Mark Murphy? Hello!
Where the hell is the Packers president and CEO in this mess? Doesn’t Mark Murphy have anything to say? Doesn’t he have an opinion on how his team got completely ripped off Monday night? Apparently not. No. Mark Murphy doesn’t care about anything beside the bottom line. He’s like a pretend NFL owner without any ownership stake. He’s apparently going to be a good soldier and toe the company line — there’s nothing to see here, move along. Thanks Mark Murphy. You’re a real stand-up guy.

2. Golden Tate and, to a lesser degree, Pete Carroll have zero character.
For either of these clowns to pretend they actually won an NFL football game on Monday night is shameful. Guess what? No one is as stupid as you seem to think. Carroll is taking the “they called simultaneous possession” route. Even though the whole thing is laughable, that’s not as bad as Tate. The idiot who caught the “touchdown pass” is walking around like he made some sort of great play. “Did you push off?” “I don’t know what you’re talking about.” And then he goes on to pretend he actually caught the ball. Face it, dick. You are lucky and you got handed one of the greatest gifts in NFL history. To pretend anything other than that happened makes you an ignorant fuck. You’re definitely wearing glorious, flowing robes right now. Why don’t you idiots just say what it was — we got lucky on that one.

3. The Packers wouldn’t have been in this position if their offense had produced.
The Packers put up 268 yards against Seattle. You read that right — 268. They used to be able to do that in a half. So what’s the problem. Well, we’ll get to the biggest problem next, but it’s safe to say teams are hell bent on taking away the Packers big-play, quick-strike ability this year and it’s working. Further, it looks like opposing secondaries are playing much more physical with the Packers receivers and the Packers receivers aren’t adapting real well.

4. The biggest issue is the game plan.
Mike McCarthy, I’m looking at you. Can anyone remember the Packers running the ball in the first half of the Seattle game? I can’t. Meanwhile, Aaron Rodgers is sitting back there getting beat to a pulp by an offensive line that looked like it was made up of a bunch of undrafted rookies. Really, Bryan Bulaga? I noticed you didn’t have anything to say after the game. Is that because you suck? Anyway, when the Packers stopped thinking they’re the Greatest Show on Turf and actually ran the ball in the second half, they sustained drives and scored. The Packers are actually averaging fewer rushing yards per game this year than they did last year. How is that even possible? How hard is this to figure out, Mike? Hey, my quarterback is getting killed and the deep passing game isn’t working. What should I do? Derrrrrrr?

5. Any team worth its salt, won’t let this debacle affect them.
Yeah, the Packers got totally screwed on Monday night, but they face a winless Saints team at Lambeau Field this weekend. If they can’t put this behind them or even use it as motivation, then they’re not a very good team. The Packers still have the talent to win the division, make the playoffs and make a run. Come week 17, this game should be distant memory.