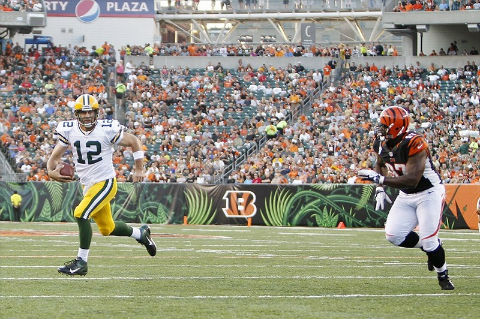 ARod is a great QB he isn’t a great leader. There’s a major difference. Leaders take the blame & make every1 better. He doesn’t.

He went on to add this.

my opinion has nothing 2 do w Jermichael. I simply stated that there’s a major diff b/t Manning/Brees/Brady & Arod as leaders

So, one, we know (or at least think) Baratz isn’t saying this because Finley told him Rodgers isn’t a leader. Two, how the hell does an agent know how guys lead their teams on the football field? Is he out there?

Is his opinion valid?

At least he managed to stir up a shitstorm, though. We’re sure this will work out real nicely for Finley. We have to wonder what section in the agent’s handbook this falls under. Being a douchebag?

Smooth move criticizing the guy who has to get your client the ball.

This Was Supposed to Be Matt Flynn's Coming-Out Party