by Andrew Chitko
in Uncategorized
8 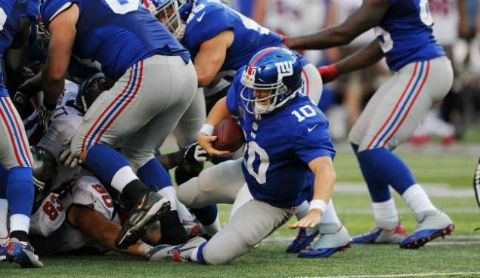 Football is a game of inches. Earth-shattering, ground-breaking stuff, huh? You’ll never get back the eight seconds it’s taken you to read this far, but wait! Don’t click the back button just yet.

Okay, so the cliche is true. In the trenches and in the physical game on the field, football indeed can be a game of inches. In the world of cerebral football though, I would argue that rather than a game of inches, it’s a game of decisions.

Some of the decisions are not cerebral though. Like whether a running back goes left or right after he finds a hole. That situation can’t be fully simulated or prepared for because there are too many variables on any given play and the defensive look and personnel the running back is seeing at that very moment will be unique. Although he may learn tactics on how to evade tacklers, the running back can’t prepare for THAT specific decision in advance because it will be the only time he’s faced with it. He will rely on past experience, his physical gifts, and instinct before planting his foot and making that cut.

Cerebral football mistakes are errors in decision making that could have been prepared for prior to the mistake happening. Last year we talked about James Jones and Sam Shields making some tremendous mental errors (that they have since seemed to correct) and in week one the Green Bay Packers MVP quarterback made an uncharacteristically poor situational decision that cost the Packers three points and put David Akers in the record book. Being the man he is, Aaron Rodgers was the first one to point out his mistake.

There’s a recent play that’s gaining a lot of buzz — the kneel down. Tampa Bay came after Giants quarterback Eli Manning when he was about to take a knee and end the game. Giants coach Tom Coughlin started crying about it.

This is a perfect example of a cerebral football decision, which largely entails considering every potential outcome of the play, and then determining which course of action will increase your team’s chances of winning the game. When stated like that it all seems pretty obvious, but let’s first take a look at the potential outcomes of this play.

Although I’ve never seen a quarterback fumble on a kneel down, I’m sure it has happened and I’m sure it will happen again. Regardless of the percentage of times it happens in the infinite universe, every player on the field should be playing as if it’s going to happen on every play. Why? Because they don’t know when it will happen, and it’s the only thing that either side needs to be worried about. By playing super aggressive in this spot, Tampa Bay almost certainly increases their percentage of causing a turnover beyond the numbers listed above.

Let’s imagine that Manning fumbled that snap, but instead of Tampa Bay coming with aggression, they stood there with their hands on their hips, assuming that the 99.8 percent trend of successful kneel downs would hold true. What if Eli botched the snap and the ball rolled harmlessly on the ground in the backfield before a Giant easily recovered it with no effort or exertion by the Bucs defense? What would the headlines be then?

“Bucs Give Up, Lose to Giants.”

Then we’d all have to endure stories about how you should play until the final gun and how badly the Bucs looked standing there. It’s that fraction of a percentage chance that means in that exact situation the Buccaneers should be coming for blood every time… right up to the whistle. Furthermore, the Giants should be blocking their asses off in case that 1000-1 shot fumble occurs.

What if Eli fumbled and the aggressive Buccaneers bowled right over a stunned Giants offense and recovered and ran it in? Would the headlines be applauding the Buccanneers, condemning the Giants, or a little of both?

People, and especially journalists, are too results-oriented and only think about what happened in the one given example rather than considering every outcome.

One can never predict when that botched snap or stumble might happen, and therefore must play like it’s going to happen every time. If all the players on both sides of the ball prepare for a kneel down (in a one score game) in that manner, then you’ll see one more play where guys go hard until the whistle.

That’s the way it should be.