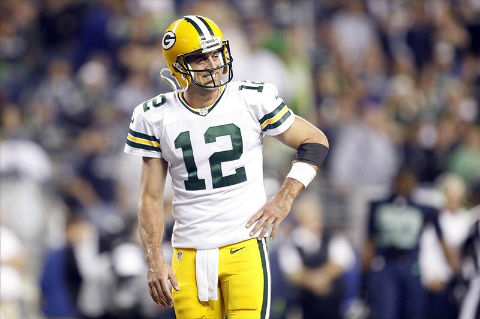 Aaron Rodgers used the terms “garbage” and “bull” to describe the NFL’s statement about the final call of the Green Bay Packers loss to the Seattle Seahawks on his radio show Tuesday.

He started the affair, which airs on WAUK-AM in Milwaukee, with a candid rant about the play that cost the Packers a win and the NFL’s seeming ambivalence toward it.

“Some stuff just needs to be said,” Rodgers said. “First of all, I’ve got to do something that the NFL is not going to do: I have to apologize to the fans. Our sport is a multi-billion dollar machine, generated by people who pay good money to come watch us play. The product on the field is not being complemented by an appropriate set of officials. The games are getting out of control.”

“My thing is I just feel bad for the fans. They pay good money to watch this. The game is being tarnished by an NFL that obviously cares more about saving some money than having the integrity of the game diminished a little bit.”

Rodgers then went on to read the NFL’s statement, which supported the call on the field — simultaneous possession by Packers safety M.D. Jennings and Seattle receiver Golden Tate, which by rule awards the ball to the offensive player — and the subsequent decision by the replay official to uphold it.

In the statement, the NFL said the officials determined both players had possession of the ball.

“I call bull on that because they say ‘officials,'” Rodgers said. “No, there was zero communication between them, there was zero communication between the guy who was responsible for the phantom first-and-25 pass interference call on (Packers cornerback) Sam Shields and the other referee who was responsible for calling a offsetting personal foul against (Packers receiver) Greg Jennings for a one-handed pushing of (Seahawks cornerback) Brandon Browner, who’d just punched him and thrown him to the ground.

“Those two guys have zero communication, zero eye contact. One of them is signaling over his head, meaning the clock’s stopped, game’s over, I’m about to signal touchback. And the other, from who knows what angle as he’s looking at M.D. on top of Golden Tate, and he’s going to say that’s a catch by the receiver while M.D. has the ball to his chest, which is usually the association with simultaneous possession rule: Who has the ball on their chest first?”

Does that make it clear how Rodgers feels? Yeah, exactly the same way you and everyone else feels — robbed.

Well, except for whiny, pissant Vikings fans, but nobody cares about them.

You can listen to the full show here.