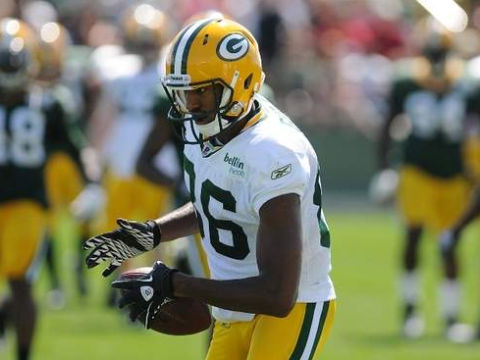 We figured one of the Green Bay Packers talented young wide receivers had to go and it looks like it might be Tori Gurley.

Gurley has been dealing with a groin injury, which will keep him out of tonight’s game with San Diego, and has been outplayed thus far in training camp by Diondre Borel.

Gurley and Borel, both of whom spent last season on the practice squad, are presumably battling each other to be the Packers No. 6 receiver. That is, assuming the Packers keep six receivers and don’t trade or release any of their top five receivers.

When Gurley is able to return, he’ll need a lot of production to make up for lost time. But at this point, catching up with Borel on the depth chart may not be possible for him. It hasn’t just been Gurley’s injury that’s created the separation between the two, but also Borel’s consistent performances in every practice session so far.

It’s possible, especially if he doesn’t get on the field soon, the Packers might put Gurley on the practice squad again. However, it’s more likely another team will pick him up. The Vikings offered Gurley a contract last season, but the Packers gave him a raise to keep him.

Although he appears to have an NFL future, it’s not the end of the world if the Packers lose Gurley. They’re clearly well-stocked at receiver.