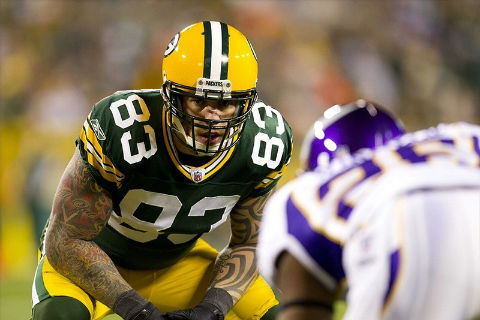 We’re not really sure what to think about this, but apparently Tom Crabtree‘s secret weapon is Celine Dion.

Crabtree, the Green Bay Packers best blocking tight end, is fighting for a roster spot… again. The third-year player is focused though.

As Tyler Dunne tells us, Crabtree quit Twitter so he can concentrate on the task at hand — making the team. Apparently, listening to the Canadian songbird is part of Crabtree’s training camp routine.

(D.J.) Williams says Celine Dion music has been blaring from Crabtree’s headphones throughout camp. Strange, of course. As all of those Twitter followers know, the tattooed Crabtree is diehard rock fan.

“He’s not listening to heavy metal anymore; I don’t know what’s going on,” Williams said. “He’s not getting soft or anything. But that just slows your heart rate down and puts you in that ninja focus mode. When he’s locked in and ready to roll, that’s going to be dangerous.”

Of course, considering that statement came from Williams — cow-tipper extraordinaire — we’re going to take it with a grain of salt. Last time we checked, Crabtree was a classic rock fan.

And we know he prefers Diamond Dave to Van Hager. This one’s for TC.