This is What it Looks Like When You Get Cut 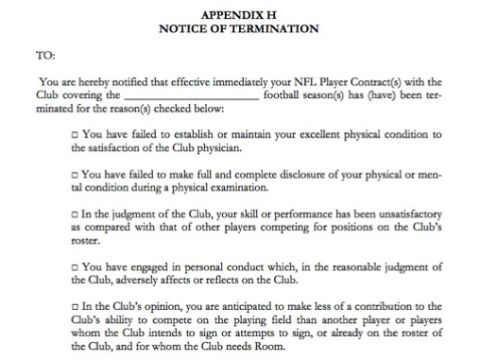 The Green Bay Packers lopped off some fat over the past few days, cutting or making roster moves with 15 players to get down to 75.

We always thought these things were handled personally, man-to-man, and we’re sure they are to some degree. But there’s also this. A nice little letter that tells players why they’re being cut. Just check a box!

We’re sure the two most common reasons are, “In the judgment of the Club, your skill or performance has been unsatisfactory as compared with that of other players competing for positions on the Club’s roster,” or “In the Club’s opinion, you are anticipated to make less of a contribution to the Club’s ability to compete on the playing field than another player or players whom the Club intends to sign or attempts to sign, or already on the roster of the Club, and for whom the Club needs room.”