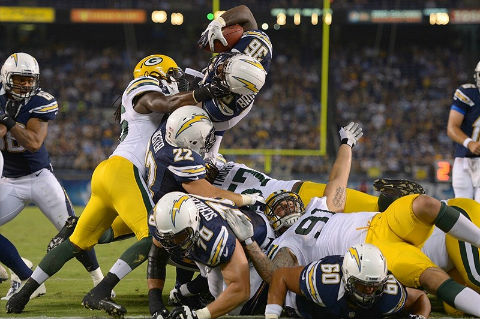 Linebacker Terrell Manning was considered an all-around playmaker in college and when the Green Bay Packers drafted him in the fifth round, some people thought they got a steal.

There was some thought that he’d eventually contend for a starting spot at inside linebacker and at the very least, was likely to be a special teams contributor this season.

Well, it looks like there’s a reason Manning slipped to the fifth round, at least if his performance in camp thus far tells us anything.

Manning hasn’t made an impact to say the least. Bob McGinn calls him invisible and Manning admits he’s not playing fast enough.

“If you ask any coach that’s here they would say he’s just not playing as fast as he can,” Manning said. “I show flashes here and there. But until you know exactly what you’re doing you’re not playing fast.”

So he doesn’t know what he’s doing.

With a crowded group at inside linebacker — A.J. Hawk, D.J. Smith, Jamari Lattimore and Robert Francois all have legitimate shots to make the roster — Manning better get his shit together or he’s going to end up on the street.

Have the Packers cut a fifth-round pick the year he was drafted? Yes — they axed tackle Jamon Meredith in 2009. Meredith ended up on the practice squad and was claimed by the Buffalo Bills that season. He’s bounced around the NFL since.

Manning obviously has some talent, so he’ll probably end up on an active roster somewhere this season, but there’s no guarantee it will be with the Packers.