Packers vs. Browns: What We Learned 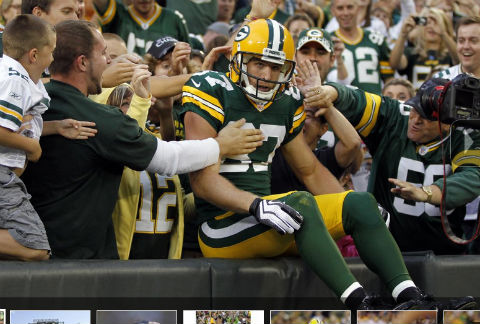 The Green Bay Packers embarrassed themselves, losing to the Cleveland Browns 35-10 in their second preseason game of the year. There’s plenty to criticize about the game, but let’s all remember it’s still preseason and this is a young team, especially since we’d be here all night criticizing if we didn’t.

Most of the Packers starters played about three series. As has been the theme, 18 guys didn’t play at all.

Here’s what we learned.

There are a few guys who are ready to start the season. Seeing his first action of the preseason, Charles Woodson stripped Montario Hardesty on Cleveland’s first play from scrimmage. Vintage Woodson. Aaron Rodgers, although not midseason-form impressive, hit Jordy Nelson with a touchdown pass three plays later. It was a great pass and a great catch by Nelson. Most impressively, Nelson beat Cleveland’s supposed shutdown corner, Joe Haden, on the play. He actually smoked Haden on first down, but Rodgers overthrew what should have been an easy touchdown. I’m going to go out on a limb here and say Jordy Nelson is probably going to be even better this season than he was last season.

What to say about Graham Harrell? Man… Harrell got plenty of playing time and did very little with it. Last week he was throwing balls all over the place (except at the receivers’ hands). This week, he looked more accurate. That didn’t translate into Harrell moving the offense though. Yes, he was running for his life behind an offensive line that featured Andrew Datko, Herb Taylor and three guys I couldn’t name. Harrell threw two picks — one on a hail mary to end the half and one when Ryan Taylor fell down. The latter, it could be argued, wasn’t his fault. Still, Harrell finished just 12-of-24 for 100 yards, two picks and no touchdowns. Is Harrell Matt Flynn? We’ve got a resounding no for that question. We’re not quite ready to panic though. We’d like to think it would be a different story if Harrell were actually playing with guys who knew what they were doing. Of course, Colt McCoy led a touchdown drive on his only series. Just sayin’.

We knew D.J. Smith was going to start at inside linebacker for Desmond Bishop. What we didn’t see coming was C.J. Wilson holding down a starting spot at defensive end. He lined up with Ryan Pickett and B.J. Raji in the base to open the game. Although Wilson didn’t particularly stand out, his role tells us two things. He’s got a pretty good shot at making the roster and Jerel Worthy hasn’t earned a starting spot yet. Smith, on the other hand, was all over the place. He played the run well (one of the few guys who played the run well) and the Packers even blitzed him. Smith was the only guy we saw get close to quarterback Brandon Weeden, which is fine for Smith, but not real encouraging for the defense as a whole.

As we all know, James Starks is an injury waiting to happen. He’s the Justin Harrell of running backs. He didn’t play Thursday night and won’t play anytime soon because of a turf toe. New signee Cedric Benson didn’t go either. That left Alex Green to carry the load, or what there was of a load, and he looked at least as good as, if not better than, Starks. Green rushed four times for 16 yards. That’s four yards per carry, but more importantly, Green looked like a guy who could break one at any moment. I wouldn’t be surprised if Green and not Benson (or Starks) is the Packers best running back as the year goes on. By the way, does anyone remember Timmy Smith?

Who the hell is Jarrett Boykin? I’ll tell ya who. He’s an undrafted rookie receiver from Virginia Tech. Is he going to make the roster? There’s probably no chance in hell, but don’t tell Jarrett Boykin. Next to Jordy Nelson, Boykin was the most impressive receiver the Packers had on Thursday. He caught five balls for 63 yards and almost single-handedly made Graham Harrell look serviceable. Boykin was sure-handed, caught balls in traffic and ran after the catch. This guy might have a future on the practice squad and maybe in the future, on the active roster.

Two guys stood out on special teams, which is exactly where these two guys need to stand out to make the team. First, linebacker Robert Francois had a nice special teams tackle to open the game. He followed that up later by throwing Josh Cribbs for a loss on a punt return. Not many guys throw Josh Cribbs for a loss on punt returns. Second, Tori Gurley had an excellent block on Otis Merrill‘s 60-yard kickoff return before the half. Merrill’s return would have been about 20 yards if it weren’t for that block. Unfortunately, Gurley didn’t catch a pass on a night when Diondre Borel, his chief competition for a roster spot, was out with an injury.