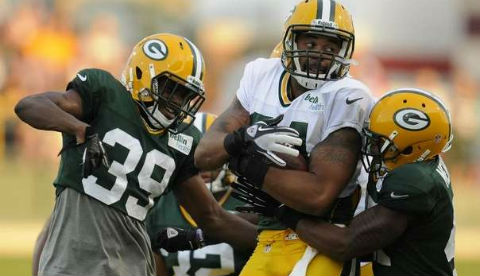 The stands were packed as camp drew it’s largest crowd of the year so far, Thursday night.

Receiving threat
It was a big night for the wide receivers, as the offense put it on the defense tonight. In a deep and talented group, Greg Jennings and James Jones both stood out. Jennings looks to be in midseason form, as he beat Otis Merrill on a jump ball that went for a touchdown and followed that play by beating Davon House on a deep in route. During the no huddle portion of the night, Aaron Rodgers had a perfect pass to the back corner of the end zone for what would have been a 20-yard touchdown, as Jennings just got both feet in. Jennings looking like an elite player is hardly a new thing.

James Jones turned in an excellent night as well and maybe this is a response to the trade rumors or to his expanded role on special teams. When Jones was not working with the No. 1 kickoff return unit, he was showing off his physicality by out-jumping and boxing-out would be defenders. On one pass, Jones was able to stretch around a well-positioned Tramon Williams and catch a pass for a short touchdown.

Jordy Nelson had a solid day and Jermichael Finley made a diving touchdown catch, but Jennings and Jones were my standouts today… with a hat-tip going to the offensive line for usually keeping the quarterbacks pretty clean as I saw it.

Carousel at cornerback
The Packers are looking to experiment with the other cornerback position that becomes vacated with Charles Woodson moving around. The three players in line to step in are Jarrett Bush, Davon House, and Sam Shields. There may be a chance that Casey Hayward moves into a more prominent role, but the Packers are rotating Bush, House, and Shields from day to day or even drill-to-drill. It is my gut feeling that House is going to come away as the No. 2 corner across from Williams once camp ends.

It was another difficult night for Shields as he was beat short, long, quick, or with deep jump balls. It has always been obvious that Shields has rare athleticism, but his technique is still way behind because he’s still learning the position. While it is hard to forget how crucial Shields was during the Super Bowl run, it is becoming more difficult to see him earn a roster spot if he does not find a way to improve.

Jarrett Bush is what he is… a Pro Bowl-caliber special teams player that can play a little defense. While Bush has improved each year, it is hard to imagine him as a full-time defensive player. Bush is inconsistent. He’ll stay assignment sure on a majority of plays, but will become over-aggressive at times and give up large gains to the offense.