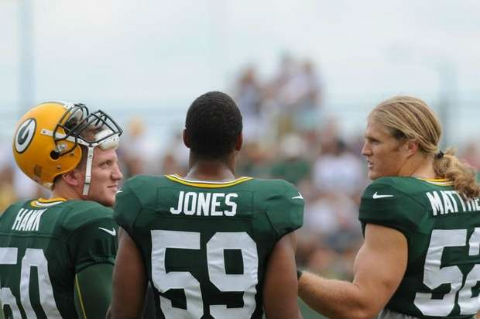 No Huddle
Today the Packers spent an extensive amount of time working with the no huddle offense. It looked to be one long series that Aaron Rodgers and the No. 1 offense ran, which lasted longer than the scheduled seven minutes. The offense seemed to function well enough, moving the ball from one end of the field to the other with a majority of plays only gaining a short distance.

Instead of huddling up before each play, the Packers called each play from the line of scrimmage. During practice the defense was able to rotate personnel, but if this was an actual game the defense would have been unable to substitute players. The offense won its share of battles with Donald Driver beating Jarrett Bush, Jordy Nelson beating Tramon Williams, and James Jones beating Casey Hayward. There was even a play where Andrew Datko and T.J Lang had a combo block on Dezman Moses and pancaked him. In the end, the defense got the last laugh as Brad Jones picked off Rodgers on 3rd and goal from about the 10 yard line on a pass thrown late across the middle.

Walking Wounded
One of the most interesting parts of following training camp each year is seeing how the roster performs when starting or heavy workload players are injured. Sometimes an injury to a veteran opens the door for a younger player and sometimes injuries to young talent show how valuable veterans can be.

The major injury from the Packers’ first preseason game was to Desmond Bishop and his hamstring could shelve him for the year. Filling in at middle linebacker is second-year player D.J. Smith. The undersized standout from Appalachian State is not only a doppelganger of London Fletcher (seriously, how can these guys not be related?), but he also plays with some of the ability that has made Fletcher a very productive player throughout his career. Smith will still have a ways to go in his pass defense, as I saw tight ends D.J. Williams and DeMarco Cosby catch passes in the zone right behind him.

Another young guy that is getting a chance to shine because of injury is Casey Hayward. With Sam Shields sitting out of practice and Davon House being out a couple weeks, Hayward was given his chance to work with the No. 1 defense today and I would say that he responded positively. On an ill-advised pass during 7-on-7s from B.J. Coleman, Hayward was able to grab an easy interception. It looks like Hayward will bite on play fakes and double moves, but he has shown the ability to recover quickly and knock away easy completions. I don’t know how I would feel if Hayward was a day one starter, but there could be enough talent there to make him an impact player this year.

Injuries to Jermicheal Finley and Andrew Quarless have given a lot of reps to guys like Tom Crabtree and Ryan Taylor. Neither had much impact today, but I’m becoming more and more of a fan of Taylor. I like Taylor’s blocking and his hands are very reliable. One of the first players out to practice today was Taylor to work on catching different kinds of passes from the jugs machine. Last year before practice he would warm up by catching punts with Randall Cobb and Shaky Smithson. Taylor may never become an elite player, but his work ethic and skill set certainly sets him up to be a productive player for a long time.

Lastly, one veteran whom many (including myself) have all but written off because of younger talent is having another solid camp. The veteran player is Donald Driver. With fan favorite Tori Gurley nursing a groin injury and Diondre Borel nicked up after that horrible punt return in San Diego, it appears Driver does not have a legitimate threat to his job. For a team looking to add another Lombardi as the odds-on favorite to do so, having a reliable target like Driver can be valuable. I have illustrated Driver’s lack of special teams contributions as a potential excuse to go younger, but I’m finding it hard to believe the Packers can rely on young players who are not healthy. Driver is a team leader that doesn’t appear to be going anywhere.

I’m planning on being at practice tomorrow for the arrival of Cedric Benson. Stay tuned!