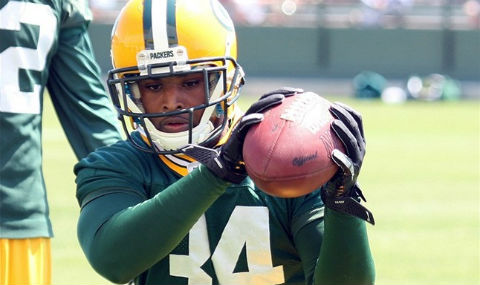 The Green Bay Packers are paring their roster. They have to be down to 53 players by this evening.

Here’s who’s been released. We’ll update until we have them all.

Keep in mind that Mike Neal and Erik Walden won’t count against the final 53. Neal is suspended four games and Walden one. When they return from suspension, the Packers will have to make a roster move to add them.

The Packers placed linebacker Vic So’oto on injured reserve and tackle Derek Sherrod on the physically unable to perform list. That makes Sherrod ineligible for the first six weeks of the regular season. So’oto will be out the entire season.

B.J. Coleman, quarterback — Not much of a surprise here. The Packers typically only keep two quarterbacks on the active roster. Coleman will be back on the practice squad if he clears waivers.

Daniel Muir, defensive tackle — This is probably the biggest surprise of the bunch. Muir performed well and was projected to be B.J. Raji’s primary backup. He even showed some pass-rushing ability. It looks like the Packers will go with the youngsters behind Raji.

Nic Cooper, fullback — Cooper is another undrafted rookie. The Packers are set at fullback with John Kuhn.

Marc Tyler, running back — Tyler was an undrafted rookie. He ran hard and will probably find his way to the practice squad, especially if the Packers keep oft-injured James Starks.

Greg Van Roten, guard — Van Roten was another one of the undrafted rookie offensive linemen. He didn’t make much of an impression.

Otis Merrill, cornerback — You probably noticed Merrill more as a returner. He broke a 60-yarder early in the preseason and has plenty of speed, but the Packers have a deep group of corners. Seems like a good bet for the practice squad.

Curenski Gilleylen, receiver — Much like Moss and all the other receivers who got released, there’s just no room for Gilleylen.

Diondre Borel, receiver — Like Gurley, he was expected to compete for the No. 6 receiver job. This probably means my boy Jarrett Boykin made the team. Borel will probably get claimed by another team.

Lawrence Guy, defensive end — Guy was a seventh-round pick in 2011. He didn’t play at all last season and got caught up in a numbers game on the defensive line this season. Could be a practice squad guy.

Tori Gurley, receiver — Gurley will probably end up on an NFL roster (maybe Miami’s). Unfortunately, it won’t be the Packers’. That deep ball he dropped Thursday night will probably haunt him for years.

Dale Moss, receiver — Moss is another undrafted free agent. With the Packers’ depth at receiver, he really had no chance to make the final roster.

Andrew Datko, tackle — He was a seventh-round pick, but has been battling a concussion. He also didn’t play terribly well when he was healthy. Chances are he makes the practice squad if no one else claims him.

Shea Allard, tackle — He was signed as an undrafted rookie and saw considerable action in the preseason, but looked more like a revolving door than a blocker.

Reggie Wells, guard — Wells was signed during camp to address some depth issues on the line. He’s a one-time starter who figured to stick as a backup, which makes this somewhat of a surprise.

Anthony Levine, safety — The Packers talked about Levine making the jump. He spent two seasons on the practice squad and was given a chance to start, but the team obviously likes Jerron McMillian and M.D. Jennings better.

Brandon Bostick, tight end — As we all know, the Packers are pretty-well set at tight end.

Tommie Draheim, guard/center — Another undrafted rookie. Draheim will probably return as part of the practice squad because of his versatility.

Sampson Genus, center — Genus was on the practice squad last season. He may not have an NFL future.

Shaky Smithson, receiver — Although he was initially on injured reserve, so he didn’t count against the roster, the Packers waived him anyway. He got an injury settlement.

Ray Dominguez, guard — Another guy waived off injured reserve who got an injury settlement.

Previous Article
Packers vs. Chiefs: What We Learned
Next Article
Surprises on Packers Final Roster